As part of a series of critical and creative responses to our current exhibition, Urban Impulses: Latin American Photography from 1959 to 2016, we republish here curator Isobel Whitelegg’s essay on the work of Brazilian artist Rosângela Rennó, written on the occasion of Renno’s 2016 exhibition, Rio Montevideo. Presenting images from the vast salvaged archives of photojournalist Aurelio Gonzalez, Renno used 20 analogue projectors to highlight the overlooked narratives of everyday protagonists during a time of great social and political upheaval in Uruguay and throughout Latin America.

Five hundred years after Portugal invaded the landmass that is now called Brazil, Rosângela Rennó produced a short video, named Vera Cruz (True Cross) after the name initially given to Brazil. Intended to be read as ‘a copy of an (im)possible film’, this work documents the landing of the Portuguese Armada on the shore of Bahia, and a first encounter between that land’s new colonisers and its original inhabitants. After five centuries, the film-stock appears worn-out, scratched, bleached white. It is accompanied by the sounds of the sea and the wind and annotated by subtitles taken from the only extant account of the event, a letter from a sixteenth century Portuguese Knight to his King. Rennó’s deliberate anachronism points back to the flimsy sources upon which the story of Brazil’s origin rests. This is history whose significance outweighs the evidence underpinning it.

I Was Witness (Fui Testigo) is the title that Aurelio González gave to a photobook that he published in late 2011. The book contains three hundred images, selected from the archive of the Uruguayan newspaper El Popular (1957–1973). The book was published close to González’s eightieth birthday. Five years earlier, he had retrieved El Popular’s archive, comprising 48,626 negatives, from a wall cavity of the Lapido Building in Uruguay’s capital, Montevideo. In an earlier life, on July 6th 1973, González’s final act as El Popular’s photojournalist had been to conceal its archive. Eleven days before he did so the Uruguayan parliament had been dissolved by its then-President, staging a coup d’état that was to usher in a brutal eight-year history of civic-military dictatorship. In the space of those intervening eleven days, a different national history had been thought possible by many. The final unexposed negatives of El Popular’s archive document a last act of resistance, a general strike and factory occupation called in opposition to the coup but eventually halted amidst violent repression on 11th July 1973. 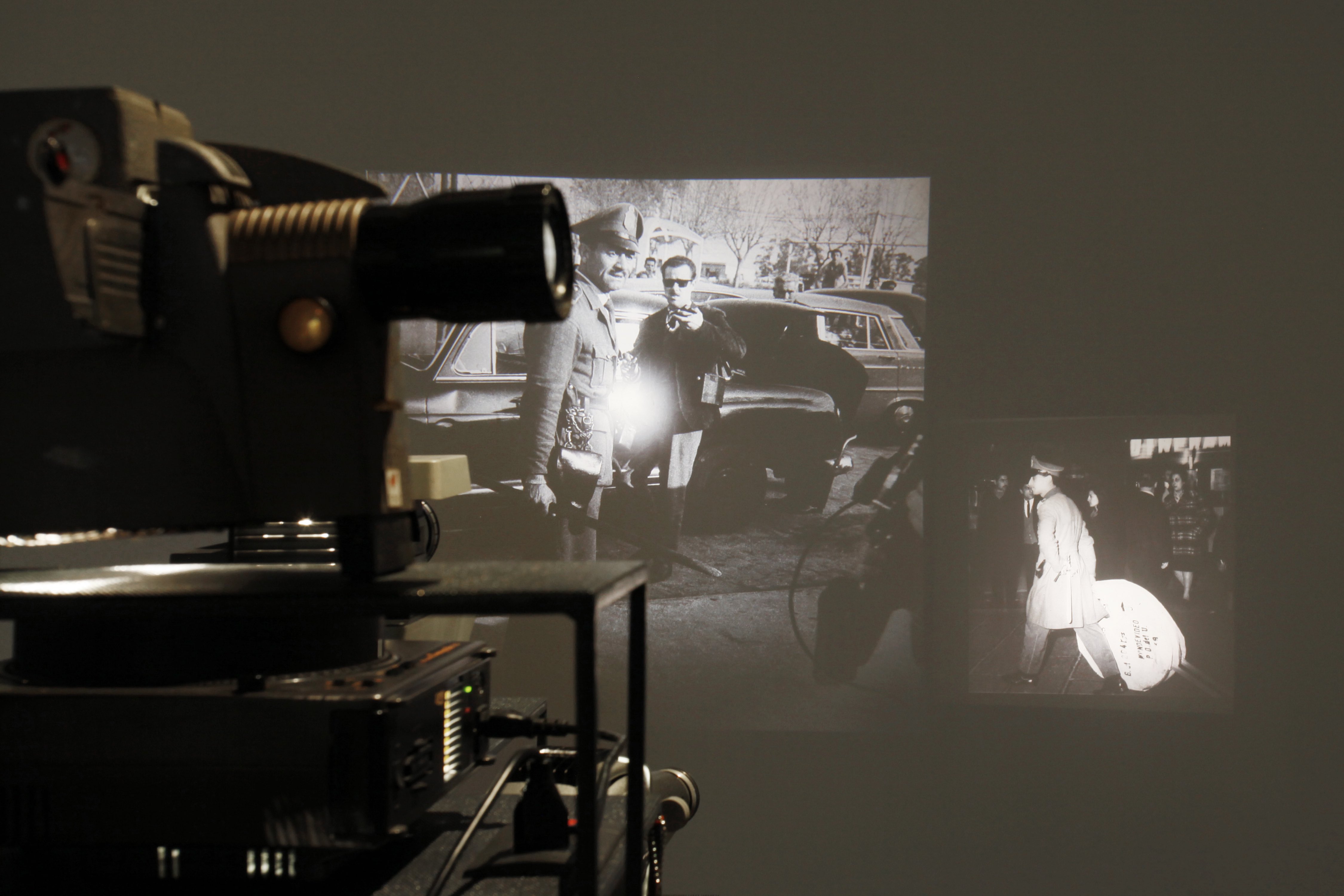 The same archive of 48,626 negatives, retrieved by González and spanning 16 years of Uruguay’s history, is the source of the thirty-two slide reproductions that appear within Rennó’s Rio-Montevideo. Speaking of this work, Rennó has said that she was interested not only in the source images themselves, but in how they might be shown, in how they might be seen. When the work is exhibited, at the touch of a release button, one image at a time may be revealed for a minute and a half before disappearing. There are twenty projectors in the room. Depending on the number of people present to trigger them, you might see various images at once, in shifting sequences. This is not a coherent set of documentary images, to be studiously cross-referenced against detailed descriptions of subject and historical context. These are images thrown into view, triggered and layered then lost. They will fail to be fully absorbed.

González’s book-title, I Was Witness, speaks with the voice of one who was once there, one now finding his way back with the aid of both personal memories and a multitude of visual cues made suddenly, overwhelmingly, available. In Rennó’s hands, these archival images – selected, re-formatted, and projected via an anachronistic array of found machinery dating from the 1920s to the 1980s – do not point the way back to any locatable history. Rather, they express the distance that prevents her, and us, from ever having been there. This sense of dislocation is compounded by prior knowledge of the images’ own history of prolonged removal from circulation. These are pictures that did not even cohere into the fragile form of a shared national memory sustained by daily newsprint. The slides’ appearance and disappearance, live and shifting in the gallery space, holds us to where we are now. In the background we hear the chords of L’Internationale playing on a music-box. With its lyrics subtracted, this popular socialist anthem is denied its collective voice. We are hearing it, moreover, at a time when it is hard to imagine L’Internationale being sung with neither irony nor an underlying sense of defeat. 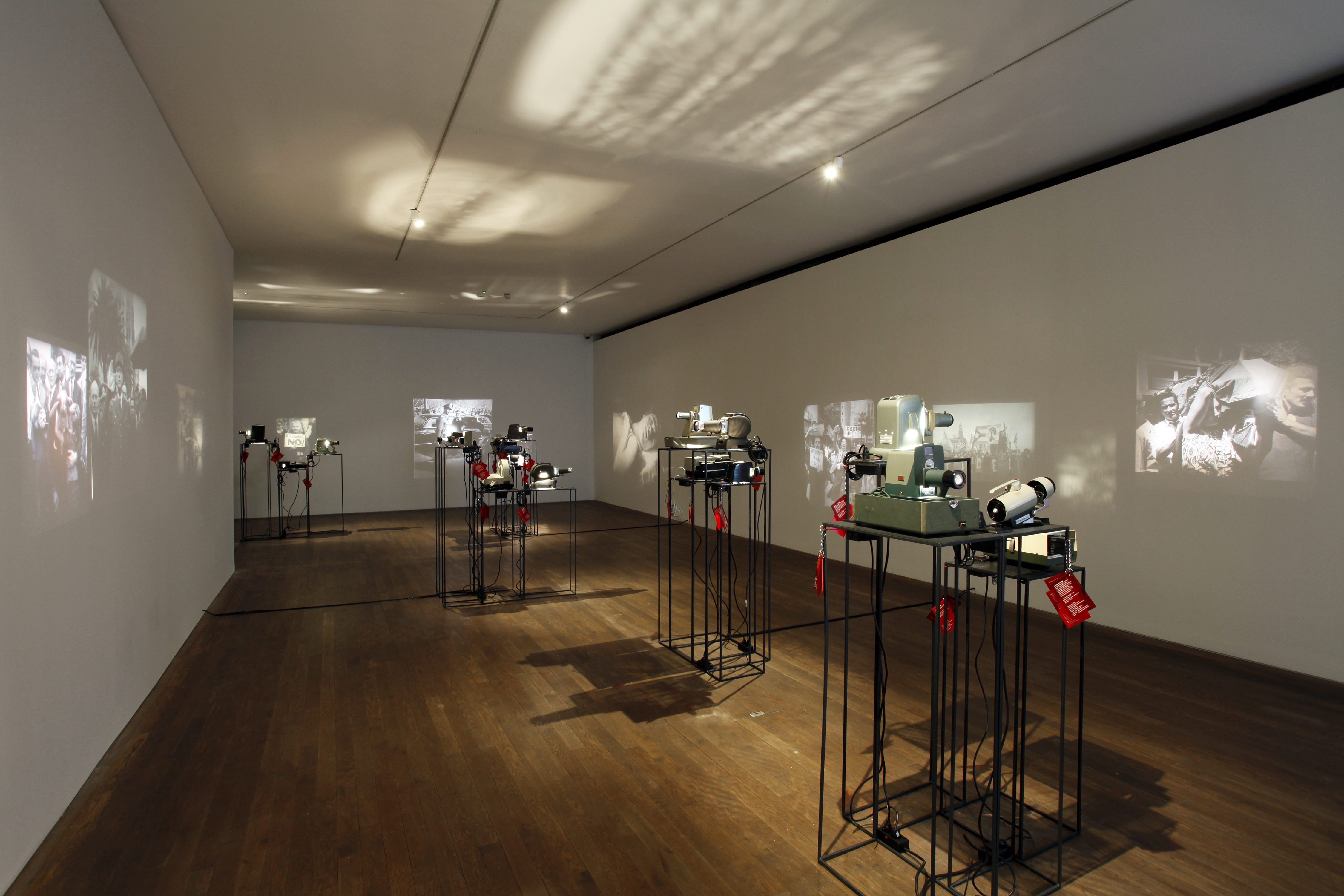 In making Rio-Montevideo, Rennó did not set out to single-handedly resolve the question of Uruguay’s historical memory. This, however, is a question that is also pertinent to her home country, Brazil, which was subject to repressive military rule between 1964 and 1985. Born in 1966, the period of Brazil’s dictatorship spans the first two decades of Rennó’s lifetime. From El Popular’s archive, she has picked out images that connect Brazil to Uruguay, and that situate both countries within a shared Latin American narrative. A man holds a placard demanding the expulsion of Brazilian guerillas from Uruguay; a marching crowd declares solidarity with Fidel Castro’s Cuba. But her choice of images is also attentive to the lives, deaths, and unions that inhabit the interstices of political history writ large. You might also see a slide of a boxing match or a young girl’s First Holy Communion, or catch a background glimpse of the Montevideo department store whose name, “London-Paris”, provoked the title of Rennó’s work.

The artist’s own memories, which belong to a similar-but-different national history, are distinct from those of González. The two are separated by a generational divide, by the qualitative difference between what is recalled from childhood or adolescence, and what is remembered as adult experience. Rennó describes Rio-Montevideo as a phantasmagoria. Recalling nineteenth century magic-lantern sideshows, this word describes the form of the work while also conjuring up an uneasy mixture of fantasy and fear, evoking the dream-like state through which a child might absorb the incomprehensible actions of an outside adult world. 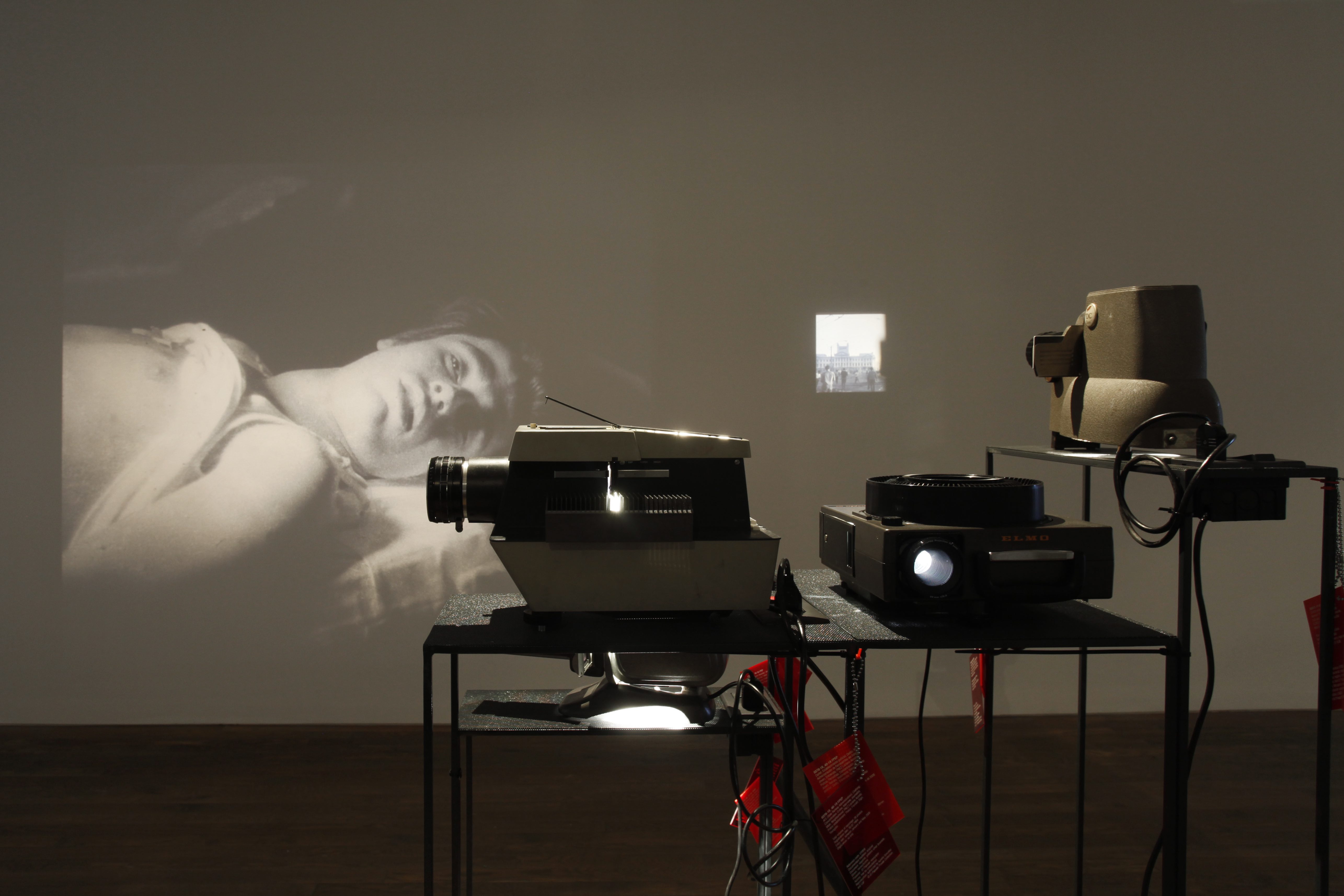 Rennó’s work as a whole is often characterised as an exploration of how history is constructed, of when, where and by what means history takes place, of the particular role that images play in this process. Rio-Montevideo approaches such questions on different fronts. We know of Aurelio González, whose camera was witness to transformative events within the social and political history of Uruguay. We know of González too as a protagonist in the extraordinary history of the fortuitous recovery of 48,626 lost images. We know of Rennó herself, whose lifetime implicates her as witness to a political history whose after-effects continue to permeate the experience of present-day Brazil. In the gallery space, these recent stories, vivid and unforgettable, vie with our capacity to comprehend the complex history that is documented by the archival images themselves. It is hard to reconcile what we are shown with what we are able to see.