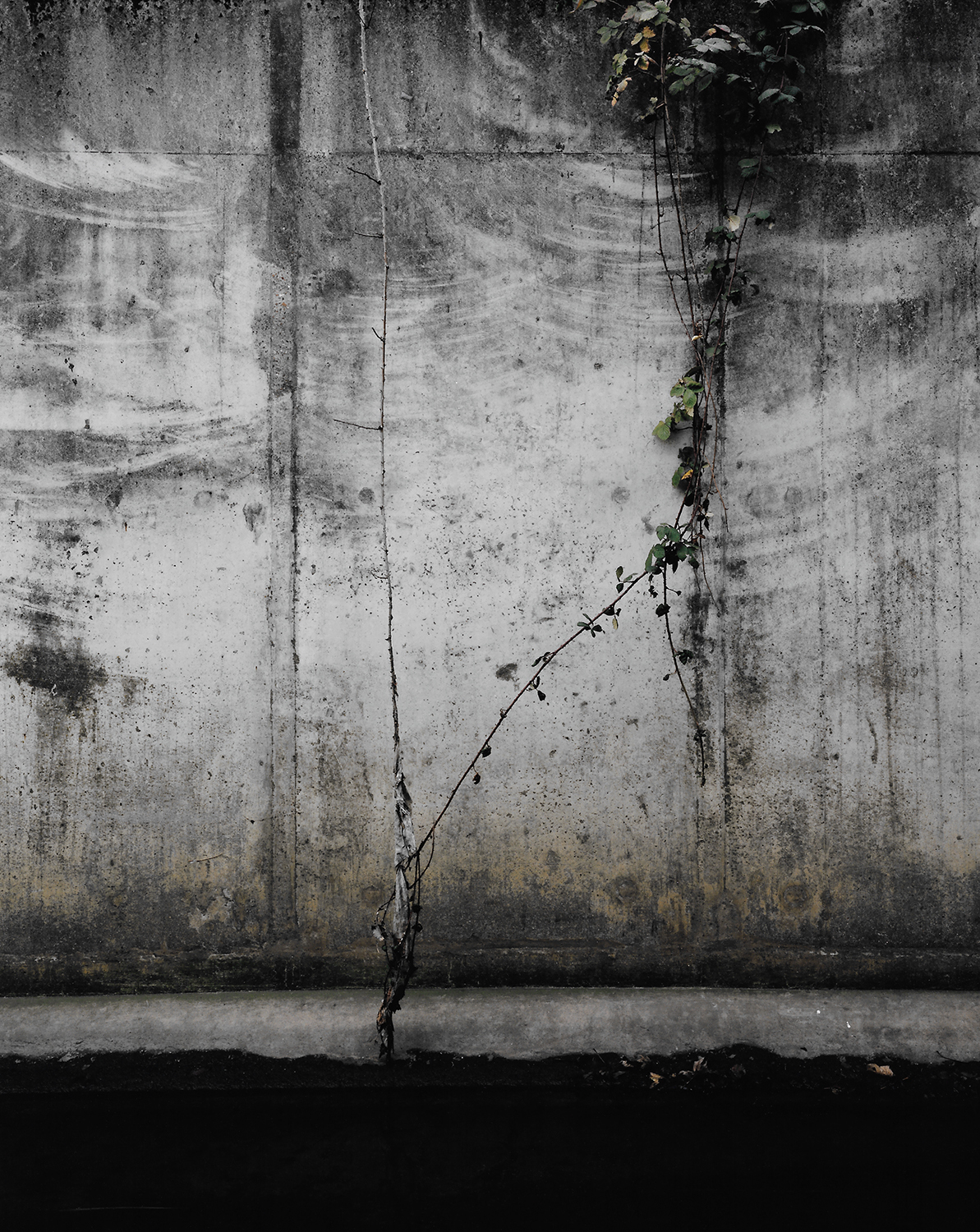 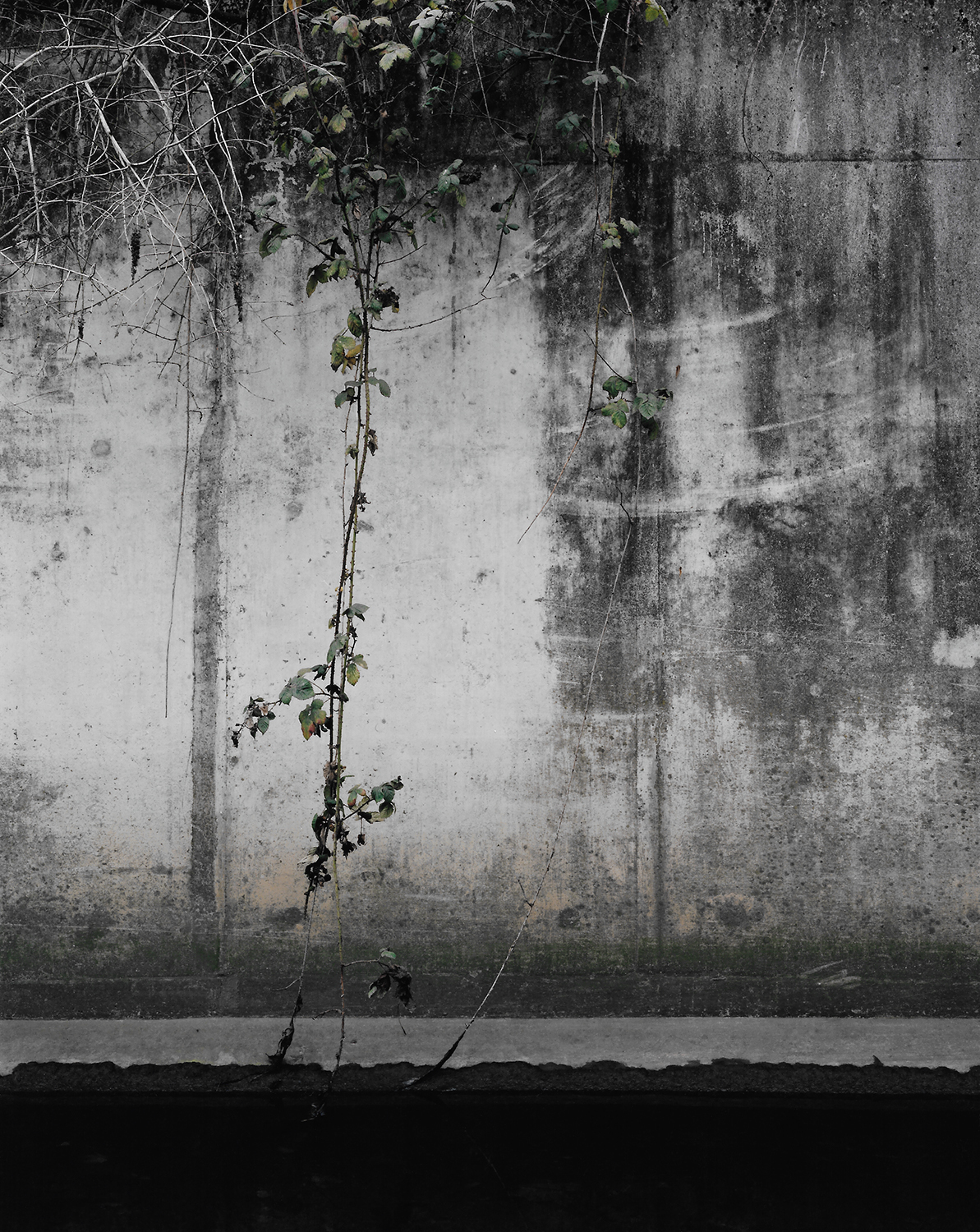 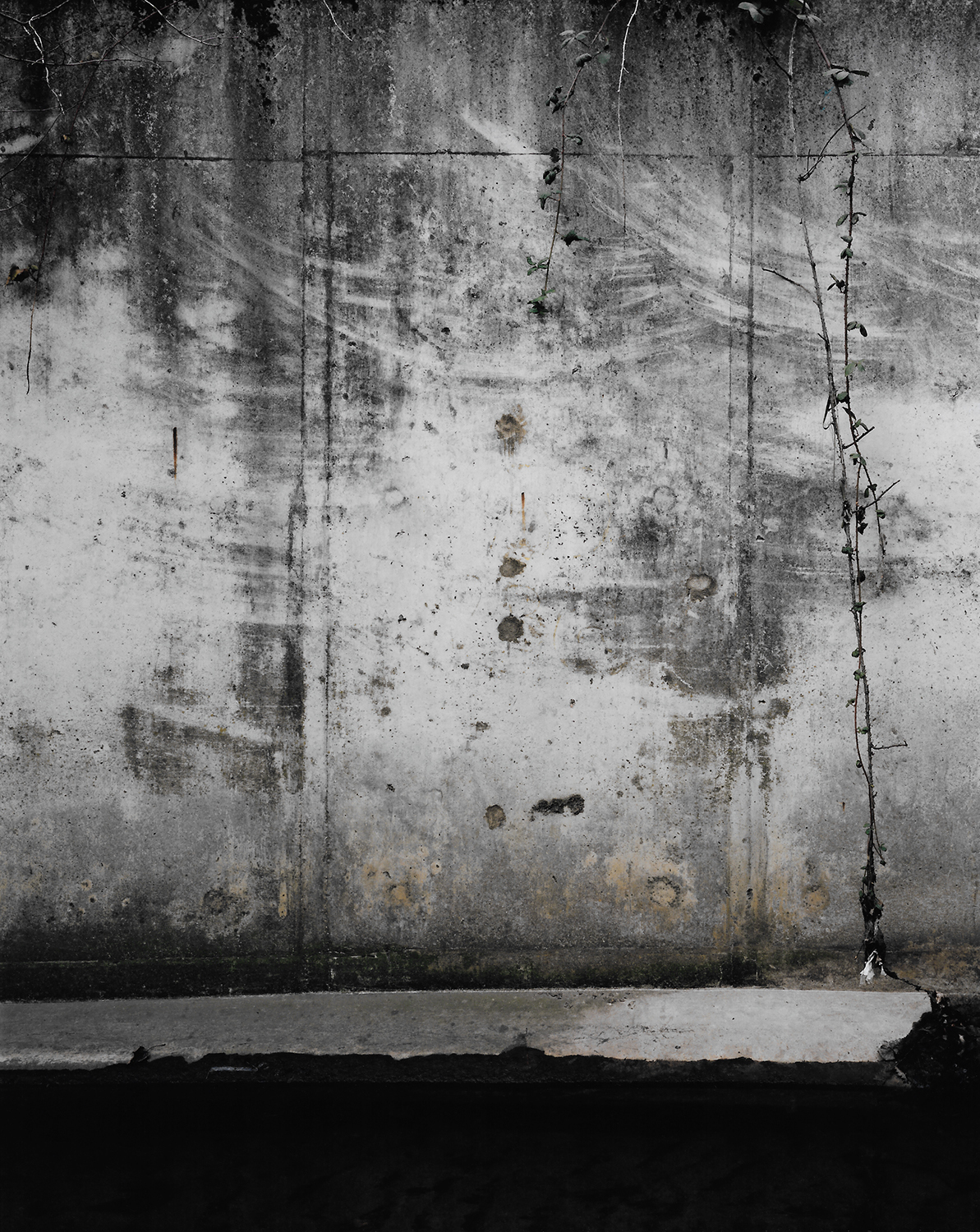 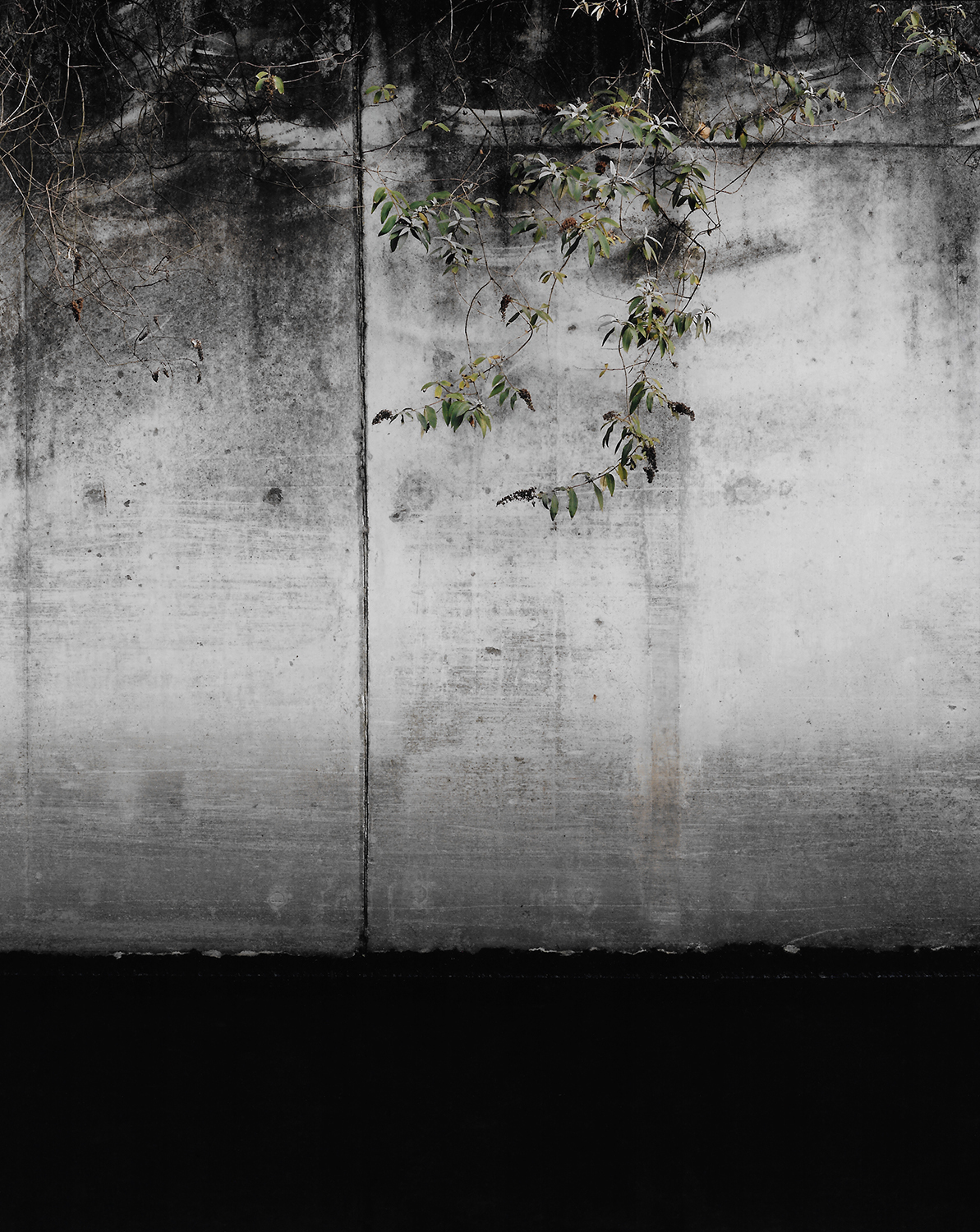 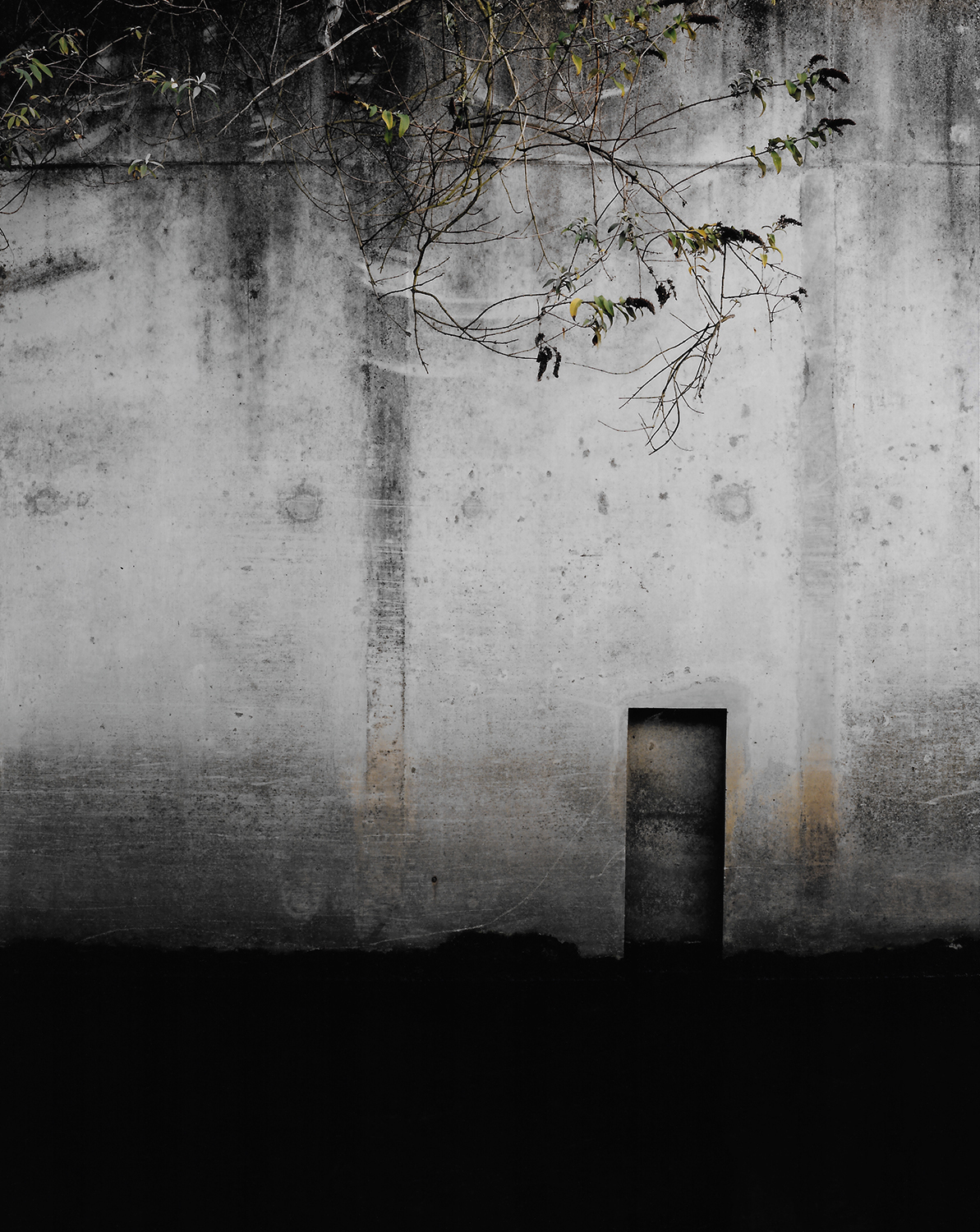 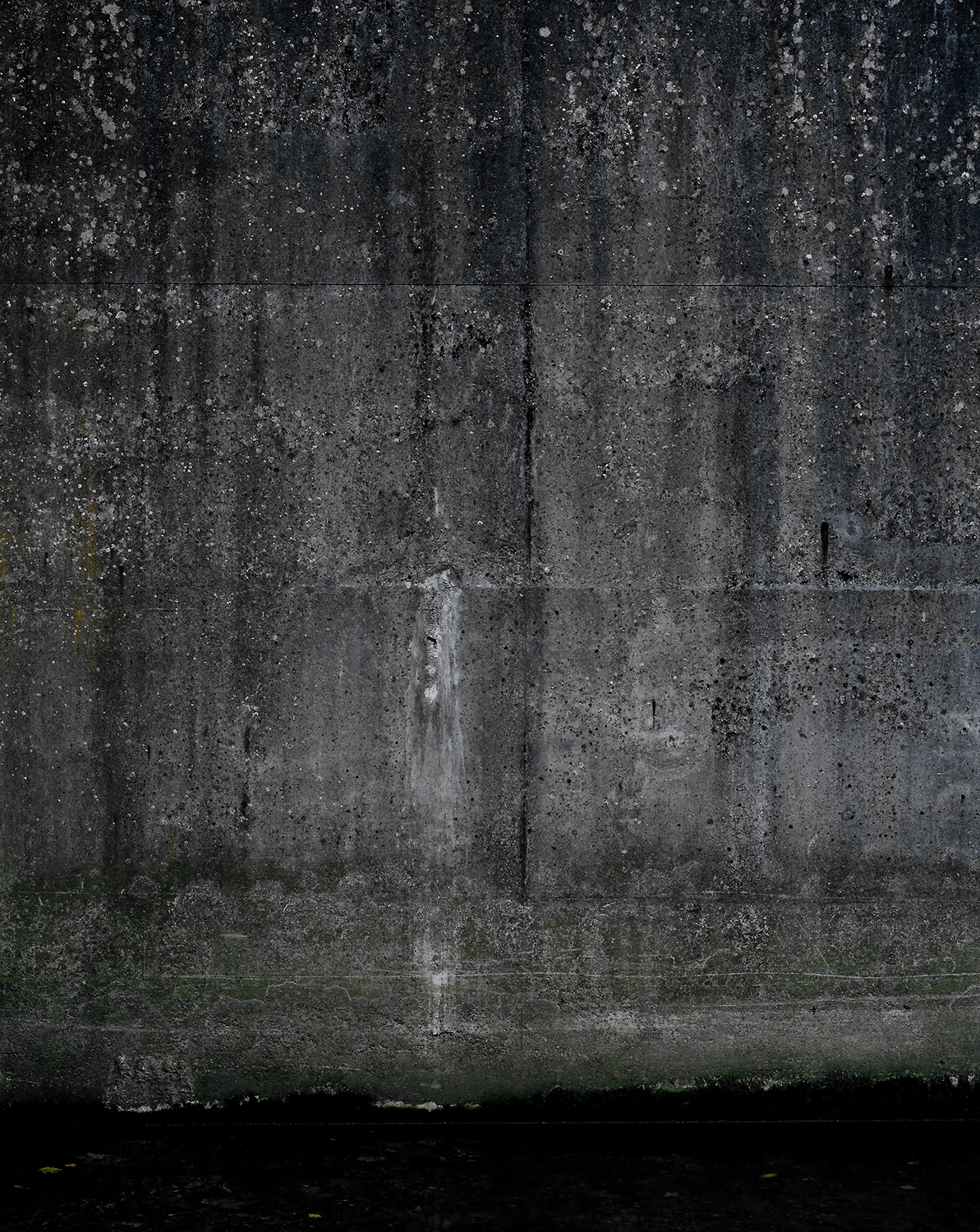 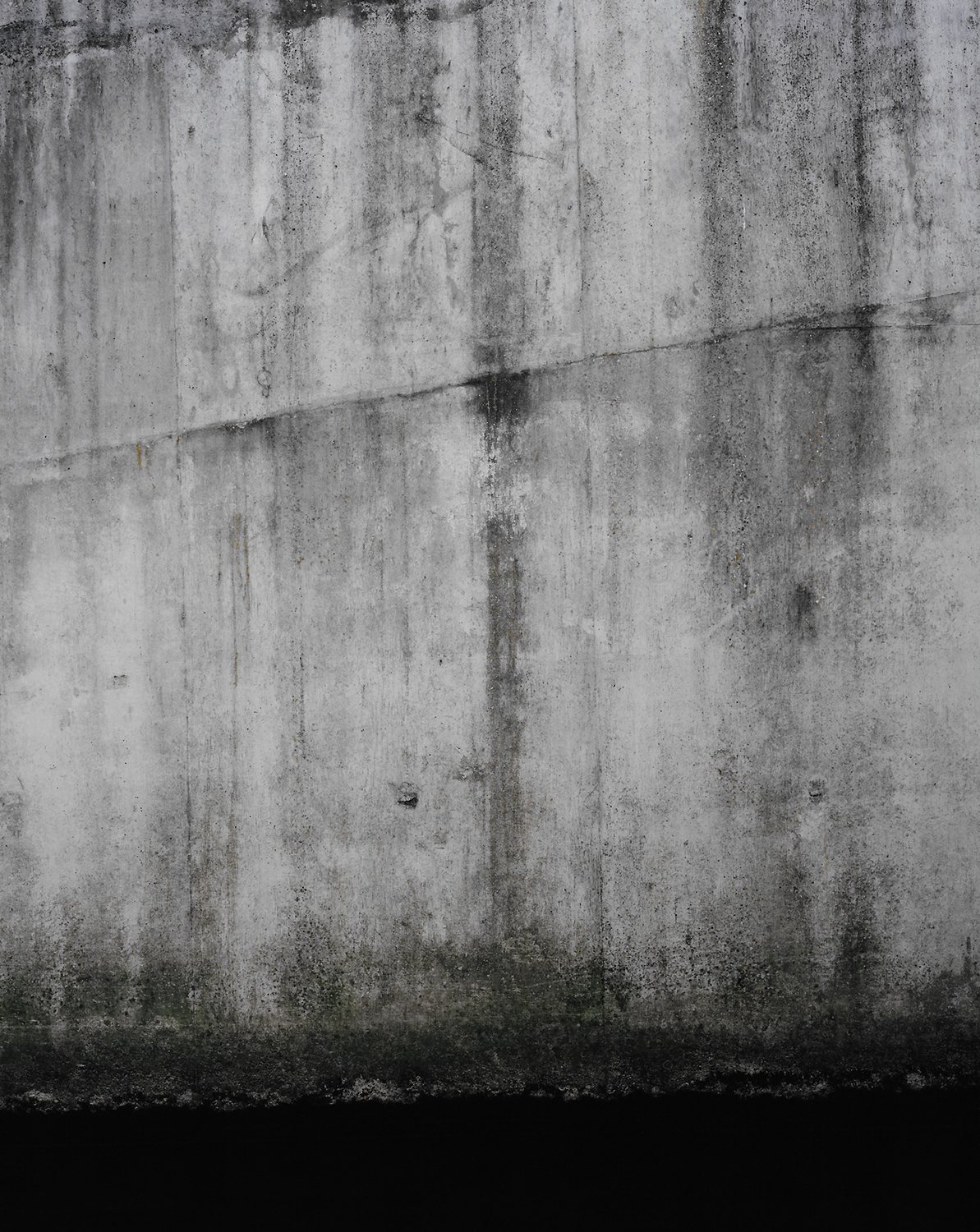 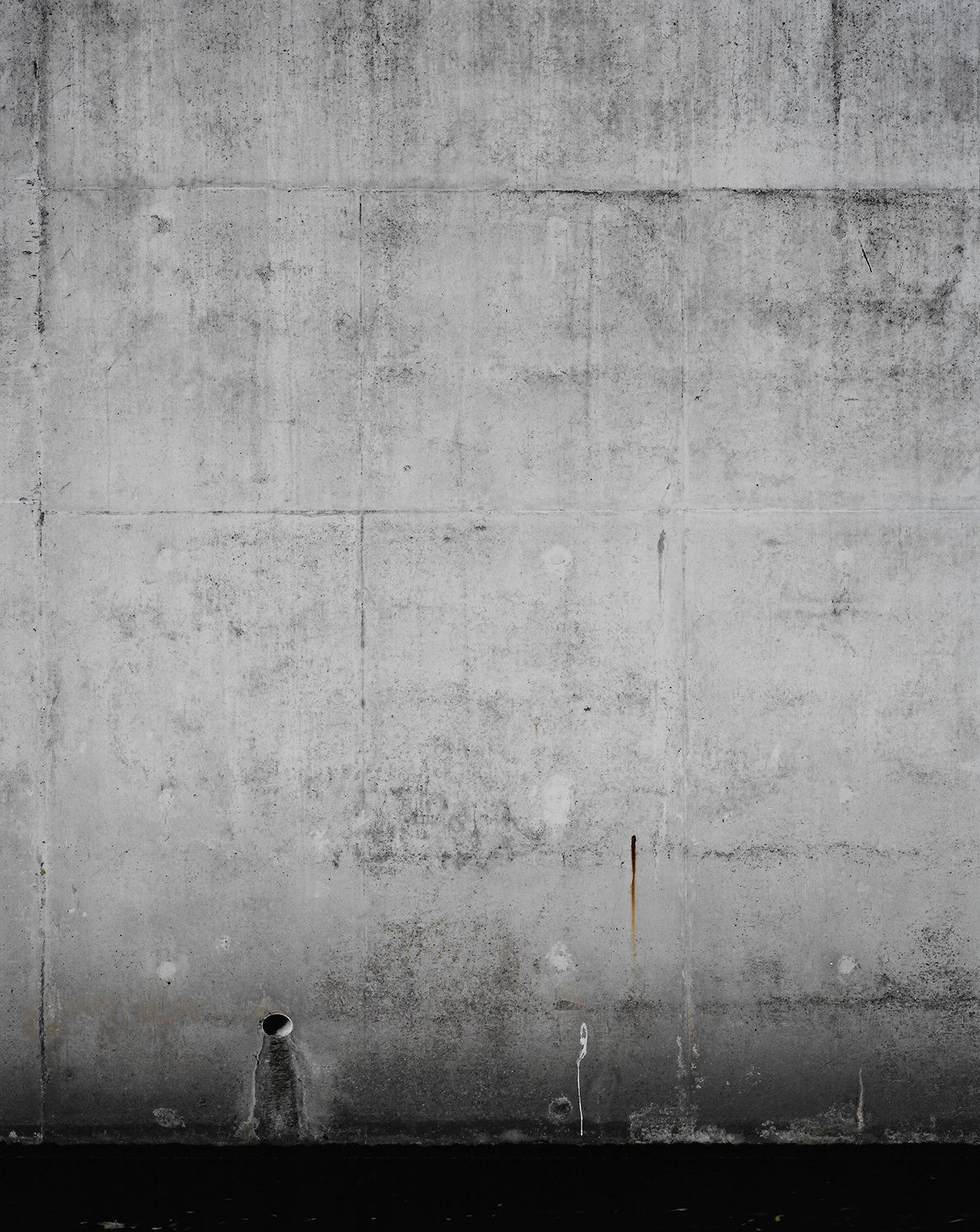 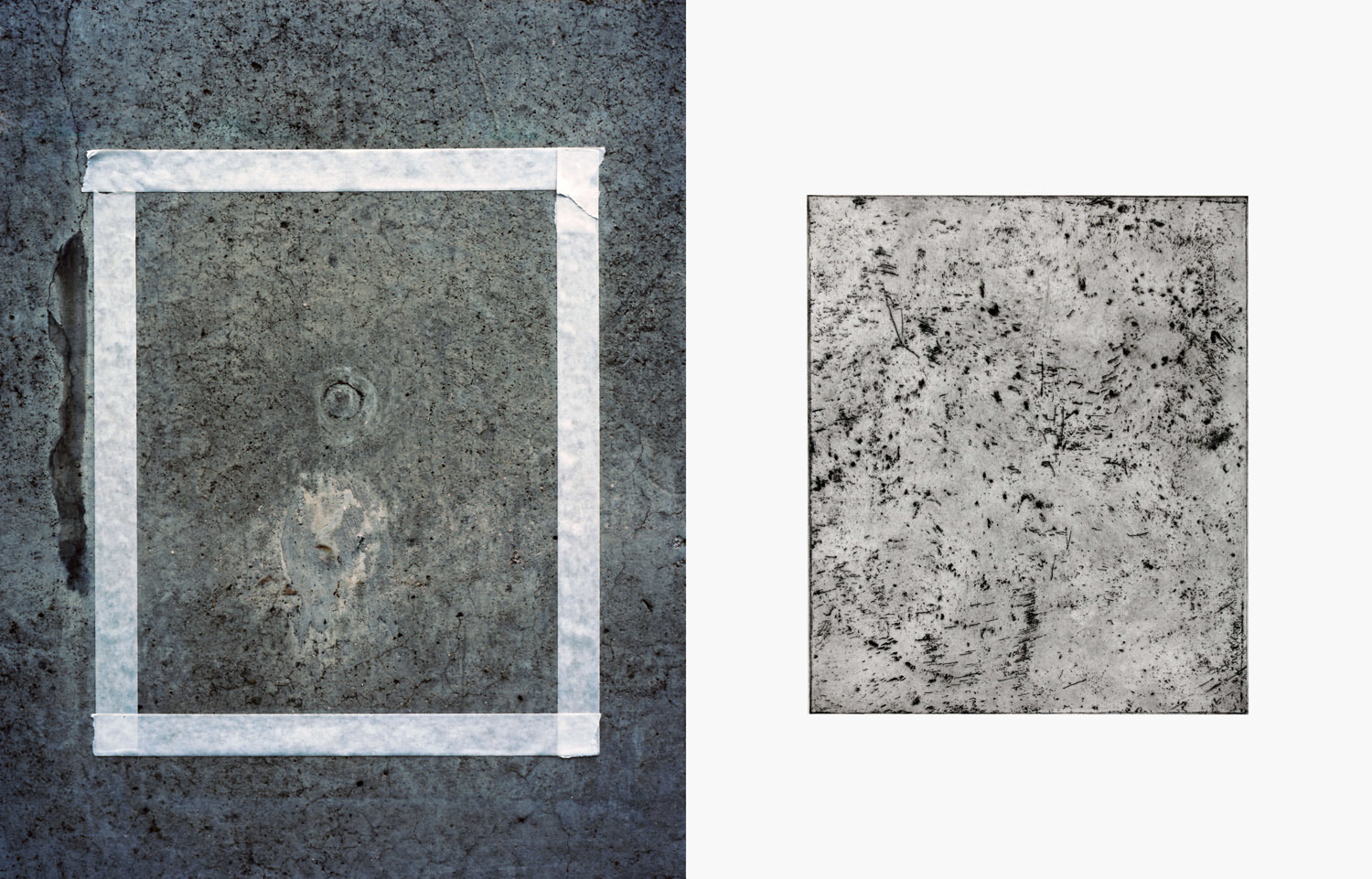 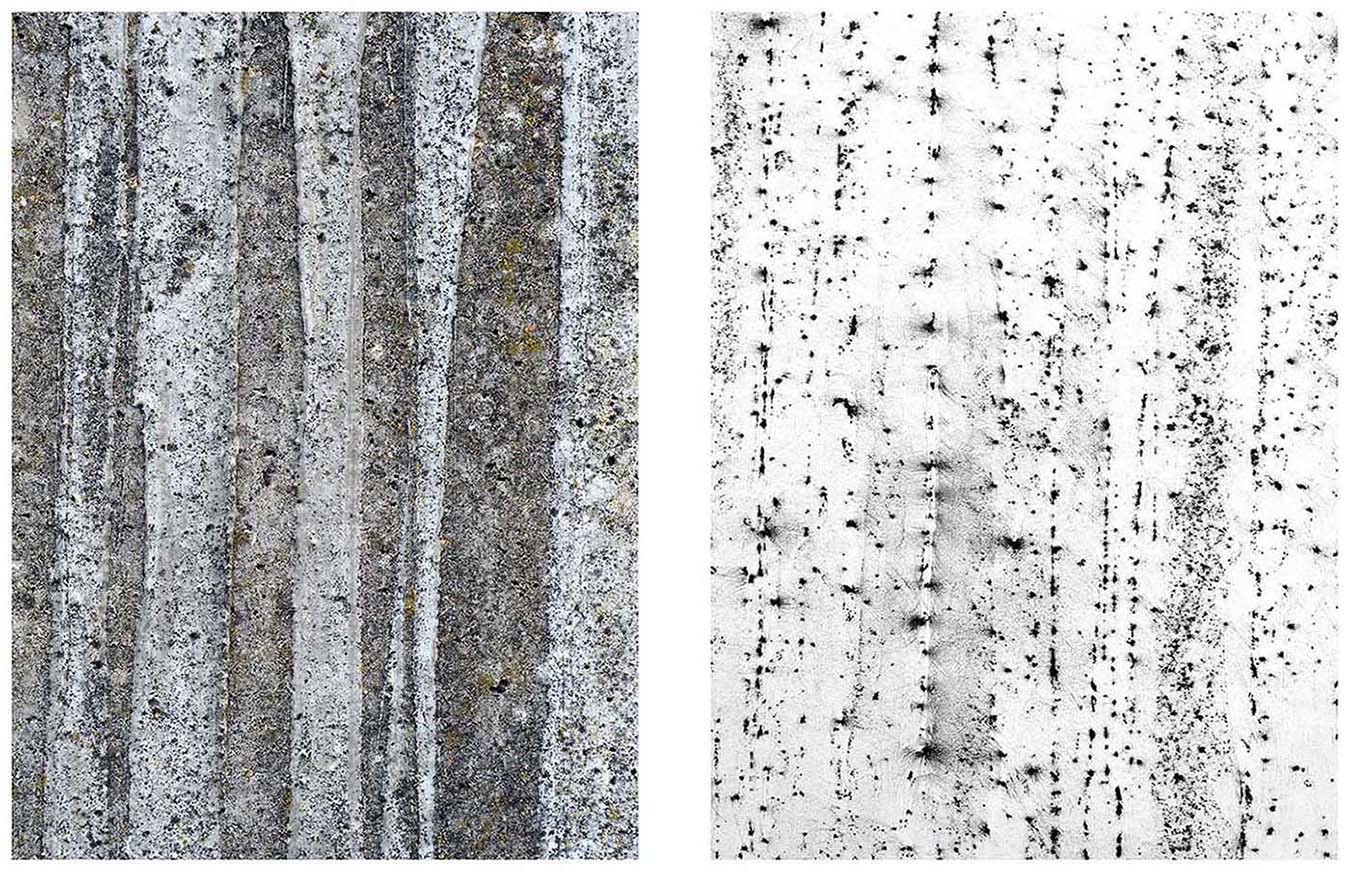 Peter Ainsworth's Zone of Transit has been published as part of the Viewpoint Photography and Landscape.

Sometimes he wonders what zone of transit he himself was entering, sure that his own withdrawal was symptomatic not of a dormant schizophrenia, but of a careful preparation for a radically new environment, with its own internal landscape and logic, where old categories of thought would be merely an encumbrance"

In Zone of Transit, 2010 - 2013 I have used spaces such as flyovers, or the isosceles of land around retail parks, as a studio. Areas that are on the peripheries of urban environments but without which the city would not fit together.  The photographs depict pockmarked concrete walls that are scuffed, water and sewage stained; the relationship between inorganic and organic structures and marks made by subconscious interactions, traces of activity and the render of concrete. The images explore how we see objects and inquire into a world where the human is not central to relations between things. This concern is informed by the analysis of Heidegger's 'tool-being' and Husserl's 'intentional object' as examined in the work of philosopher Graham Harman.

The act of going onto site without an institutionally ratified task (to clear, to fix, to clean, to measure) could be viewed as a transgression. The project was originally inspired by JG Ballard’s novel Concrete Island, 1973 in which an architect becomes stranded between intersecting motorways after a car crash, a modern interpretation of Daniel Defoe’s Robinson Crusoe. Mirroring the protagonist of Ballard’s novel (who at the end of the book is unable to escape psychologically from the space though being physically able) I have a sustained somewhat inscrutable engagement with the sites. There is no psycho-geographic reference, nothing happened on this site in terms of historical event and, as in Andrey Tarkovskiy's film Stalker, 1979 there is nothing specific about the 'zone' referenced in the title of the project.  It is more important that a limit is set, you put a certain 'zone' off limit and although things remain exactly the same as they were, it is perceived as another place. A studio in the landscape where the works produced shows the repetitious mapping of space.

Perhaps the process of making work, in the context of this zone is a physical way to determine an identity of the site. A site that embodies a sense of otherness and estrangement that is symptomatic not only of a psychological state but a condition of modern society. A contrast or comment on the usage of transitional spaces, the homogeneous 'non-place' as explored by Marc Auge designed to be experienced on the way to somewhere other. Where the user has no connection to any specific location or can determine no sense of identity. The way I make work is by looking at the recesses, at the edge of things through an engagement with spaces that are not habitually used in the normative navigation of the urban. The act of making as a search for something that is missing, something unseen or intangible dealing with substrata of the city, it’s substructure. It is above all, a space in which objects interact despite, or rather as well as, being interacted by human activity.

Peter Ainsworth is an artist, researcher and lecturer whose current practice includes photographic work, moving image and sculptural assemblage. His work has been exhibited at Stephen Friedman Gallery, National Media Museum and NRW Forum and is held in the collection of the Museum of Fine Art Houston. He has been awarded a Pavilion Commission, Flash Forward Award and named a Dazed and Confused Emerging Artist. He is currently undertaking a PhD in the department of Visual Culture at Goldsmiths University with working title, Affect, Reception and Relation in the Contemporary Photographic.