We invited Stephen Mayes, Director of the Tim Hetherington Trust, to respond to our exhibition Dave Heath: Dialogues with Solitudes in relation to the work of photographer Tim Hetherington (1970-2011).

While the parallels between Hetherington and Heath’s work are most explicitly seen in their depiction of soldiers in the Korean and Afghanistan wars respectively, deeper metaphysical links can be found between the two photographers. Raising questions about the triangular relationship between subject, photographer and viewer, Stephen Mayes considers the forging of an unconscious complicity between the three that might instigate new connections and ways of interpreting the world around us.

The powerful message at the heart of Dave Heath: Dialogues with Solitudes is that photography at its best offers an active engagement with its subjects. Dave Heath reminds us that the connection is not a closed relationship between subject and photographer – we see in his work that the photographer charges the image with latent energy that is released only when a viewer completes the circuit. After all, in looking at Heath’s images we are not invited to simply witness the solitude of others (many of whom are not alone) but to participate in the condition of solitude. It’s an odd and ironic quirk of the medium that these images join us in shared encounters with solitude, separated by time and geography yet connected in our common experience.

And here is revealed one of the great deceits of photography, perpetrated by the language of the 20th Century that places the viewer as a passive recipient. It’s a position endorsed by the vocabulary of “documentary” which suggests that the mere creation of a record is sufficient to fulfil the purpose of the image. The elevation of photographers as heroes allowed us to abrogate the responsibility of seeing onto the anointed “eyewitness”, numbing the viewer to our personal responsibility as witnesses of the resulting images. The responsibility of seeing does not end with the photographer but rests full square on us, the viewers, a fact of photography that is often overlooked as we turn the pages and scroll the screens we choose to peruse. We carry the memory of what we have seen and with it the responsibility of the knowledge gained, albeit curiously devoid of the pleasure or pain associated with the experience of gaining the memory. 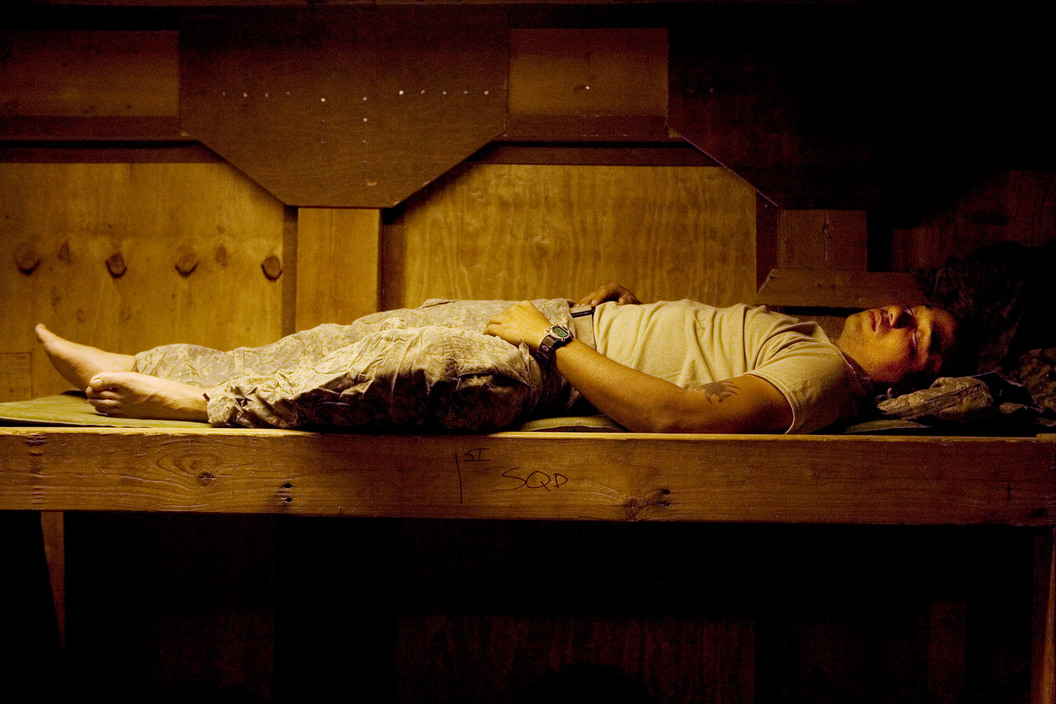 Tim Hetherington was another photographer who sought the active engagement of the viewer. Across his short career (he died age 40 in 2011, killed in Libya by pro-Gaddafi forces) Hetherington was rarely satisfied by simply delivering images to an audience. He constantly fought the limitations of the photographic medium as a passive vessel for information and he refused to be contained by the definition “photographer” which describes only a craft skill. His mission was not to make pictures but to share his experience in the world and to help us as viewers understand the joys, frustrations and knowledge gained by living. This quest is most evident in the experimental video Diary (20 minutes, 2010) but maybe at its most mature in the 2008 series of still photographs Sleeping Soldiers.

Crafted in the form of a journalistic reportage, the series mimics the style of photojournalism. Made using DSLR equipment in 35mm format, the images were unstaged and made using available light in the Korengal Valley, at the time the most fiercely fought territory in Afghanistan. The pictures are even captioned in typical news format: “AFGHANISTAN. Korengal Valley, Kunar Province. June 2008. Lizama sleeping”; “July 2008. 'Doc' Kelso sleeping”; “Specialist Steve Kim sleeping”. It’s easy to see how Hetherington was labelled as a conflict photographer. But where is the conflict? It would be ridiculous to think of the images as any sort of news – “City Edition Exclusive: SOLDIERS SLEEP…”.

As we drift from one sleeping form to another we might find ourselves in a meditative state, participating in a thoughtful review of half-dressed fighters stripped of the uniforms and guns that define their role and revealed instead as boys, curled like infants, in a study of aggression and vulnerability. This is not a soft attempt to humanise “our boys”.  It is a hard, blood-tinged study of masculinity that engages unflinchingly in the metaphor of sleep and death, exploring sexuality and aggression.

Here is the very essence of war that is not depicted in images of battle but plays as questions inside our heads, linking our visual memories of kinetic conflict with these images of men at their most vulnerable. We have to ask ourselves why we’re looking at trained killers represented as innocents; fighters who are army strong yet baby soft. This question is at the heart of Hetherington’s exploration of violence, which at the time of his death he understood as a male process of older men commissioning younger men as instruments of their political ambitions, to be dressed and equipped not only to fight but to be the visual representation of power.

In effect, Sleeping Soldiers is a meditation on the nature of masculinity that looks deeper than the role-play and performance of war, and strips away the familiar iconography of conflict to contemplate the origin rather than the consequences of aggression. 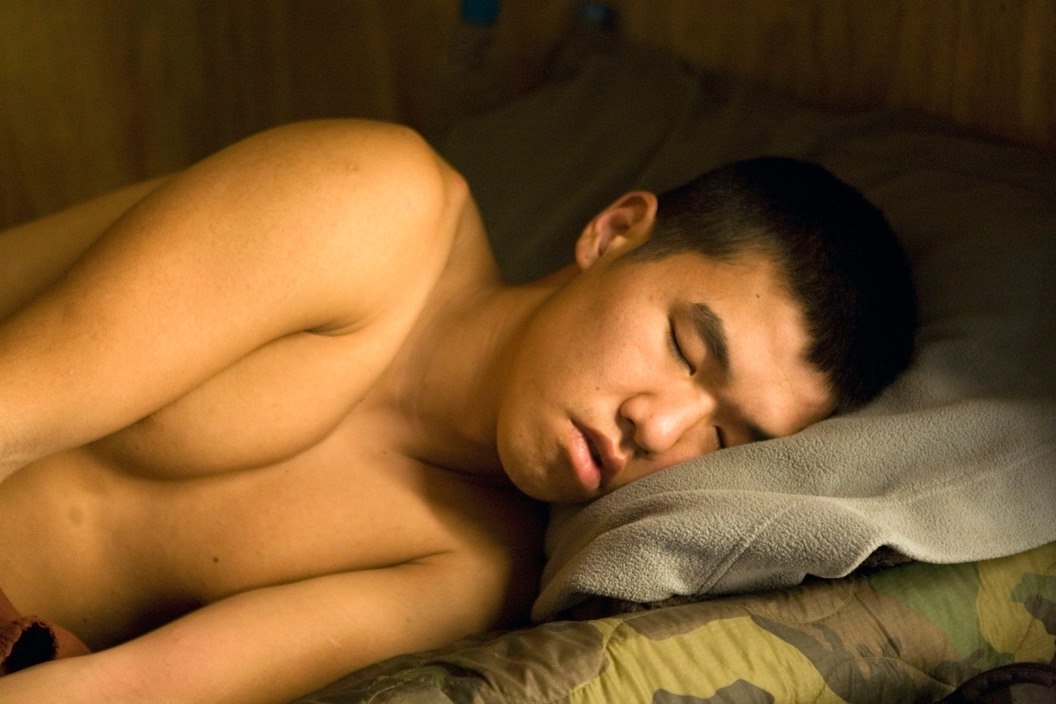 The significance of Hetherington’s use of imagery is profound because in spite of the documentary style its success relies on deliberation more than representation. By handing the responsibility of thought to the viewer he is involving us in the process: what is our connection with these sleeping figures? And by extension, what is our role in their deployment, whether by involvement in the political process, by contribution of taxes or by tacit acquiescence? We are “only” viewers but by requiring our active participation in understanding the images we are revealed as complicit in the subjects represented.

Dave Heath is widely acknowledged to have disrupted the easy conventions of street photography in the early sixties and Tim Hetherington can be seen as a Millennial successor who developed the concept of the documentary image as a meditative process. Both are now gone, but they have left dynamic legacies and it is our responsibility as viewers to pick up their challenge for the next generation.

Tim Hetherington (photographer and filmmaker 1970-2011) inspired a generation with his grass roots innovations as a contributor to global media. The Tim Hetherington Trust continues his mission for this and future generations. THE VISIONARY AWARD is designed to foster innovative approaches to storytelling and supports visionary individuals who we hope will offer inspiration to others by example. The award seeks out visual artists and journalists whose thinking and process reaches beyond the limitations of conventional media practice to create engaging and dynamic communications using any appropriate technology to create and distribute stories that inspire audiences and bring a fresh understanding of the chosen subject.