A Story Behind A Photograph by Saffron Lily

Eighth in the series of commissions for Develop at Home - a digital programme of articles, interviews and resources to help us stay connected, inspired and informed at this time - is Develop Participant Saffron Lily sharing a story behind her photograph A New Normal.

This photograph was created as part of an ongoing personal series I started during lockdown. Feeling challenged by the sudden disconnect this time period has caused, this series was a way of re-connecting, collectively questioning and highlighting different perspectives during this time. 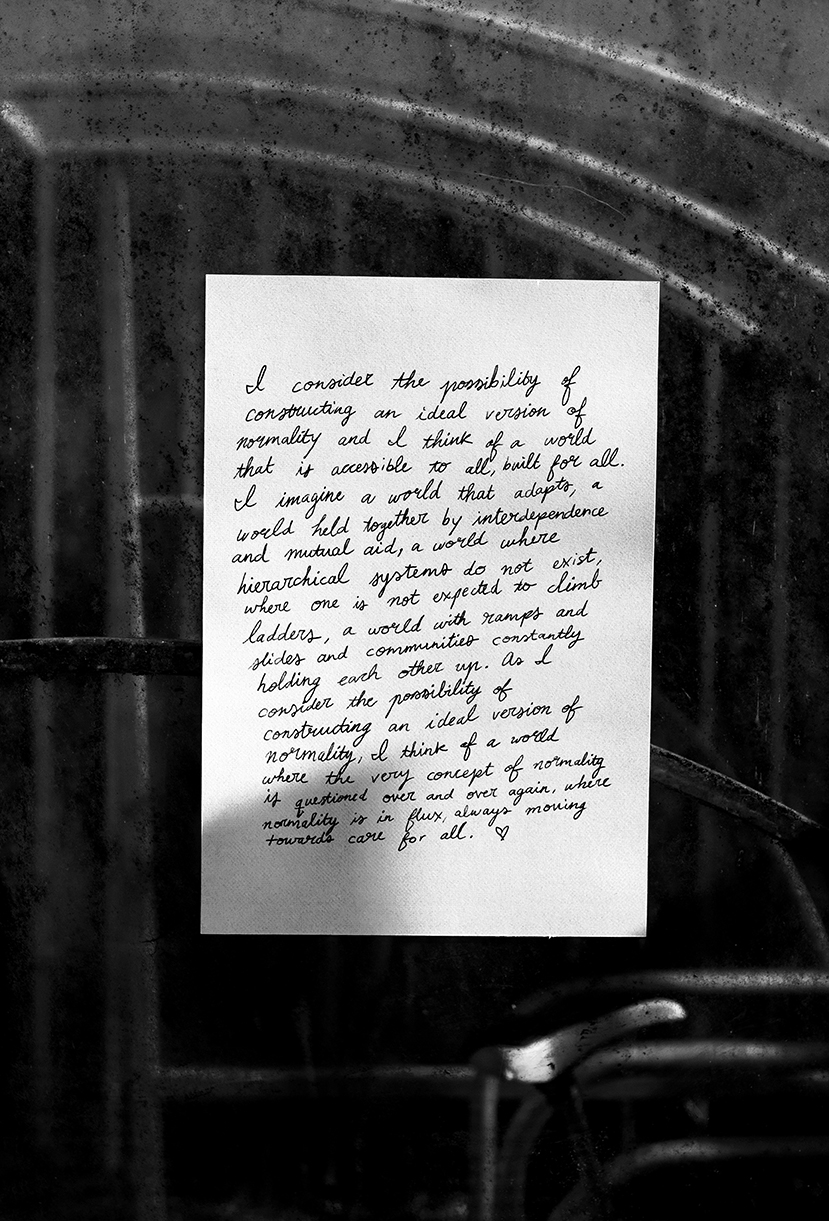 Reflecting on the conversations that flooded our newfound dialogue and considering notions of ‘returning to normal’ and the ‘we’re all in this together’ rhetoric, when it was evident that circumstance let so many of us slip through the cracks, this practice was a way of navigating these feelings. Recognising physical distance, I invited new perspectives across different borders and asked them to personally redefine their hopes for a new normality. If you could re-envision a status quo, a given standard, a safe space, what would it be? What would it look like? What could you call your own? What could we call ours?

For me, this practice was a way to create with others in the face of difference and space. After receiving these definitions, I printed their handwritten perspectives, photographing them in territories close to my home, in places they’d never stepped in but had now somehow become a part of. I visited empty bus stops, housing estates and train stations placing them in positions that garner the same attention in public space as mainstream advertisements and government regulations. It was a way to acknowledge their importance, the need for attention to individual perspective and public dialogue. To express the collective unrest that most of us felt.

This practice was a way of taking portraits without those I was photographing actually being there. It made me question what represents us when we take away our physical form and what happens when you give those a platform to present and communicate beyond their physical sense of self. I think we respond to visuals of the human form in a very different way because we see something we can recognise or empathise with immediately. These images require your attention and patience to last a little longer, it is not of a face or a body you can instantly connect with in the same way we usually do. Instead, they are words that someone has taken the time to write. I think that speaks to the essence of what I was trying to communicate with this project though, that we need to take time to listen to one another, that we need to make effort to understand one another.

The featured letter in this photograph was sent by Hannah Nishat-Botero, age 22, United Arab Emirates. This is a developing project and I’m considering ways to catalogue and document the work online. If you would like to send on a letter for consideration, it would be great to see your responses. I also recognise that writing a letter isn’t an accessible format for everyone, so if you would prefer to send on an audio clip or an alternate format instead, please feel free to get in touch and email me at: untitledpublication@outlook.com