As part of a series of texts and projects taking the exhibition, Urban Impulses: Latin American Photography from 1959 to 2016 as a point of departure, we invited the Venezuelan artist, Lucia Pizzani, to reflect on the current crisis in her home country. Through her project Cesta Básica, Pizzani draws attention to the scarcity and absence of the most basic provisions whilst also addressing the problematics of representation in the face of such political and social fallout.

I was born in Caracas, Venezuela in 1975. Back then my country had one of the wealthiest economies in the continent. There was social mobility, great public universities, a good public health system and world-class museums. I grew up in a family of leftist intellectuals, my father a painter and my mother a choreographer and visual artist.

At the time, Venezuela had an important influx of immigrants, some from other South American countries, particularly those under military dictatorships and many from Europe, who came looking for a better future. This outside influence and exchange of cultures made us stronger and more diverse as a nation. Currently the opposite is happening, Venezuelans are fleeing the country en masse, walking miles and miles to neighbouring countries and further beyond. Recent UN Refugee Agency figures calculate that the number of citizens leaving are at 4 million.

How did we get here? It's a long and complicated story. For forty years two centre left parties alternated in power. In spite of the oil wealth, corruption took over in the 80s and 90s and the growing disparities amongst the Venezuelan population paved the way for Hugo Chávez to launch his candidacy for President. After attempting a violent coup in 1992, going to jail and ultimately receiving a presidential pardon, he was elected in 1998. I was just about to graduate with a degree in Visual Communications from Universidad Católica Andrés Bello, so for my entire adult life, Venezuela has been under the umbrella of ‘Chavismo’.

At first Chávez represented the hope for change, but this first wave of optimism, buoyed by his showmanship and rhetoric, was slowly overtaken by his military background. His control of the media, the way he handled the economy and the lack of a proper division between the branches of the state (legislature, executive and judiciary) were steps towards the constitution of the current regime.

What we have now is effectively a dictatorship, a rule of oppression and corruption. Chávez’s successor, Nicolás Maduro, has maintained his stronghold through fraudulent election processes with candidates drawn from within his ranks and given free rein to make and break laws without recourse.  It’s an ongoing social and political crisis which currently has people eating from rubbish bins and dying because of lack of medicine.

I am a Venezuelan immigrant able to come and study Fine Arts in the UK, unlike many of my fellow nationals, and I am able to make it my home. While I feel integrated into the London art scene, at the same time I strongly identify with the Latin American artists community here.  Being far away from the continent has made me feel that I belong even more.

I have been working with photography for around 16 years now. Some of the pillars for my image making process can find their origins in a visual culture that is very rich, very Venezuelan, but also found in the rest of Latin America. Conflict is always present. When I'm in Venezuela I experience mixed realities very complicated to communicate: danger, violence and chaos, but at the same time the warmth and abundance of an incredibly beautiful place. Another pillar is form, the formal aspect of artworks that I grew up surrounded by, art in the public space, all over the city, in houses, buildings and in my own home is very important. So too is the mid-twentieth Century tradition of abstract geometry in Venezuela and Latin America that has influenced the following generations so strongly. 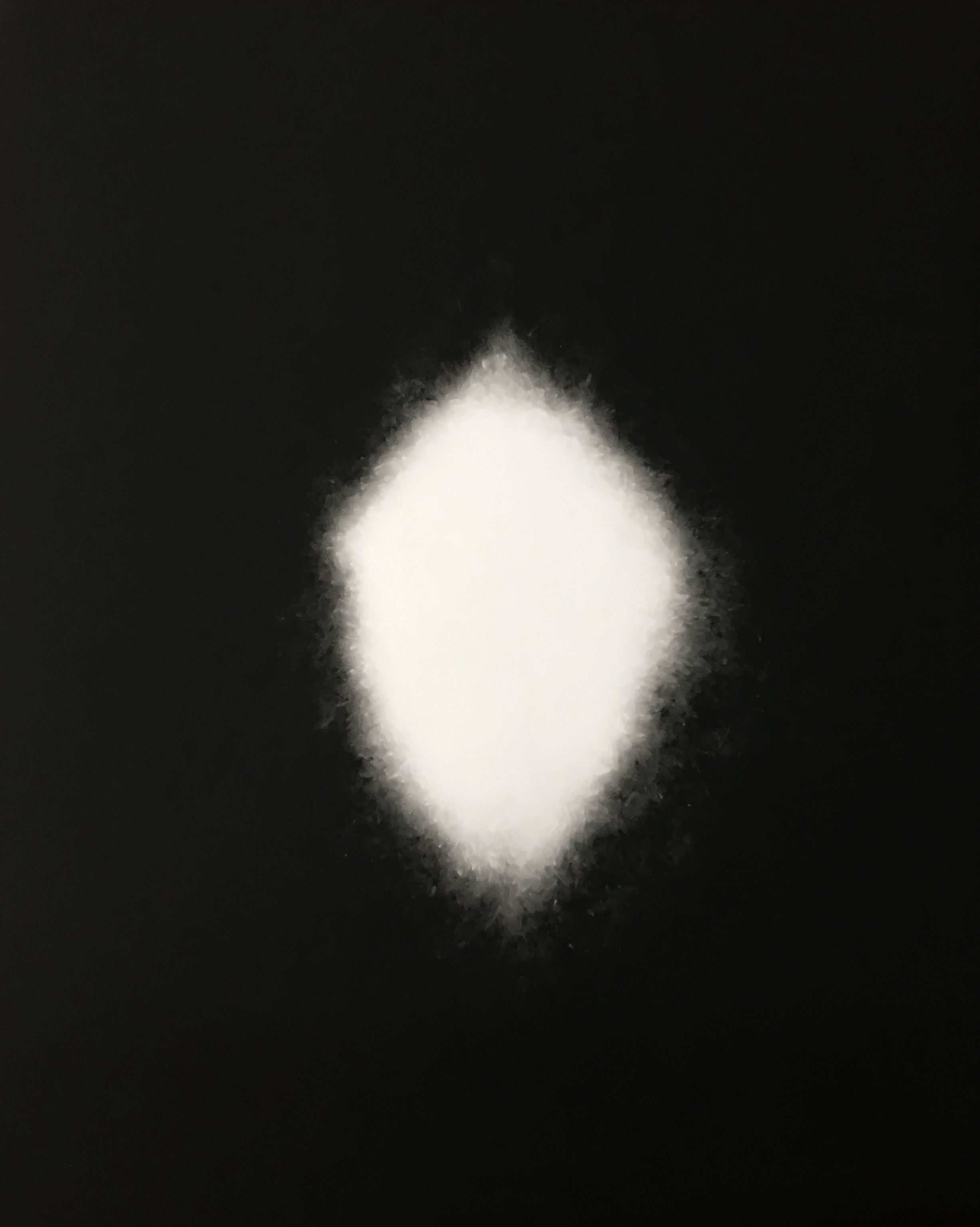 These pillars, these influences, can be found in my Basic Food Basket photographic series made in response to the crisis. Let me introduce you to the concept, as it is not well known in this part of the world. The Basic Food Basket (Cesta Básica alimentaria) in Venezuela, and other developing countries, refers to an index of food items that a family needs to survive for a month. It is often related to the minimum salary and used to calculate the purchasing power of the population and consequently the levels of poverty. The government creates the list of items and fixes their prices. The last officially published list in Venezuela consists of 25 products including canned tuna, rice, beef, chicken, sugar, eggs, sardines, salt, corn flour, pasta, mayonnaise, oil, beans, milk and coffee, amongst others. 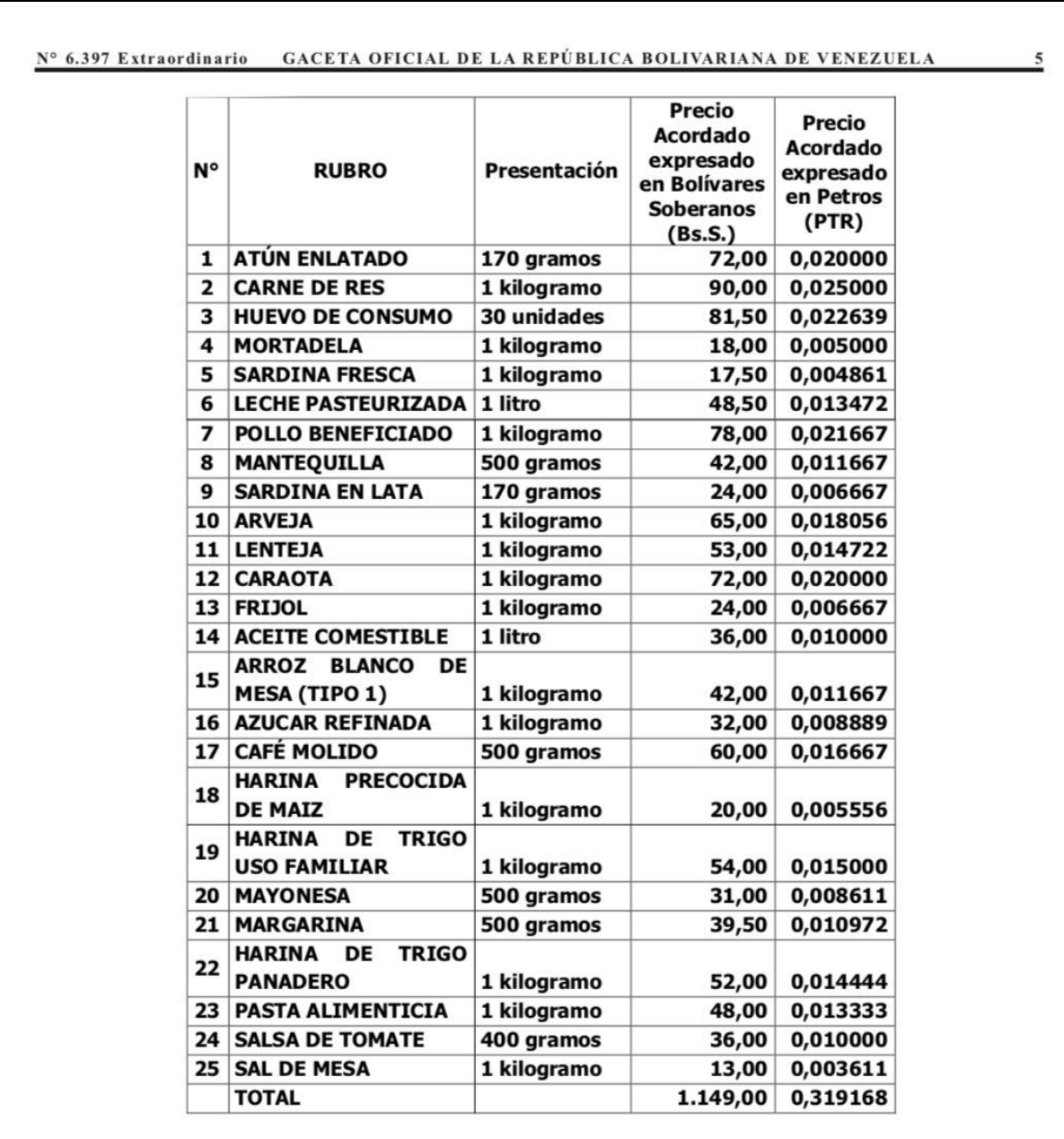 The fixed prices are one of the reasons items go scarce. The government doesn’t subsidise food production and instead they have been importing goods with oil money, something that brings corrupt officials more profit. The destruction of our agriculture has made our country more dependant on oil prices than ever, and even the petrol industry has deteriorated drastically. Hyperinflation is another symptom of an economy completely mismanaged. The International Monetary Fund calculates that this year inflation is going to reach 10 million per cent, one of the worst in modern times.

When I started working in response to the calamities in my home country three years ago, a family needed 15 minimum salaries to cover the monthly basic food products.  Despite being raised several times, the minimum salary in Venezuela is still lower than in Cuba or Haiti. Its only 7 dollars.  Nowadays the number of salaries required to cover the basic goods has risen to 86.  No wonder people are looking for food in the rubbish bins.  The level of malnutrition in children is shocking.

My family and friends back home are suffering. On the many occasions I visited Venezuela, I saw it with my own eyes. I had to adapt, I switched to survival mode. Suddenly I started to look into people's bags, trying to guess if they had found corn flour or toilet paper – yes toilet paper… it has been scarce for a few years now.  Alongside contraceptives and many health related products, the major problem has been the lack of medicines.

I questioned myself as a visual artist. I wanted to communicate, to represent scarcity, absence, concepts and feelings difficult to grasp. How could I use photography to transmit these emotions? And without taking a direct image from reality – which, by the way, is very dangerous as the regime’s censorship and prosecution of journalists and photographers is very harsh. Last week I learned of a friend that was jailed because of a tweet. I might not even be writing these lines if I wasn’t living outside Venezuela... fear is always there.

I decided to work with the food itself, use the actual material to make images that communicate the intangible, the feelings and experiences of a population in despair. The "Cesta Básica" photogram series is that response. Using the items from the Basic Food Basket list, I aimed to create a tension between abstract evocative images and those that reflect bodily necessities, the basic need of aliments, something much more physical. 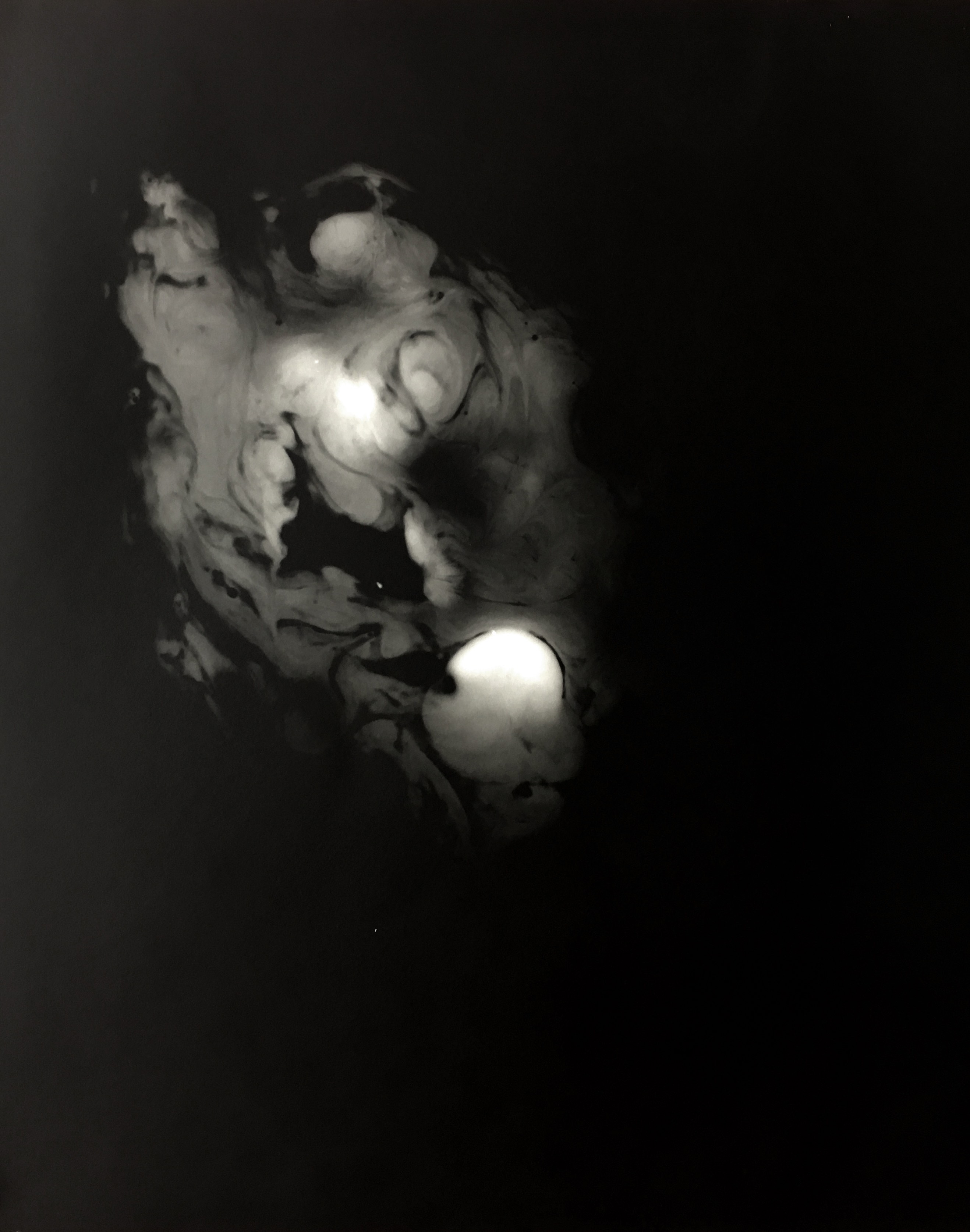 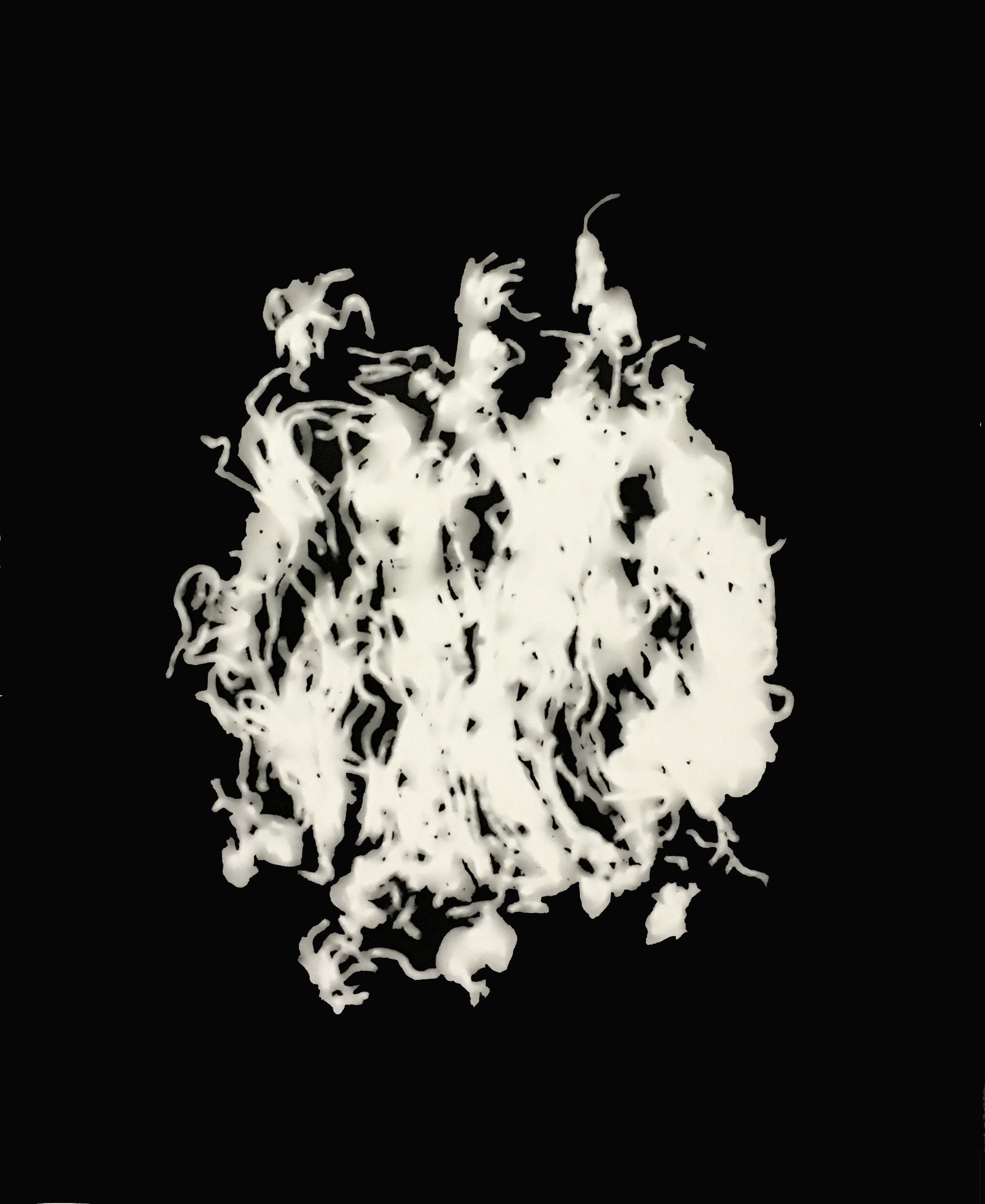 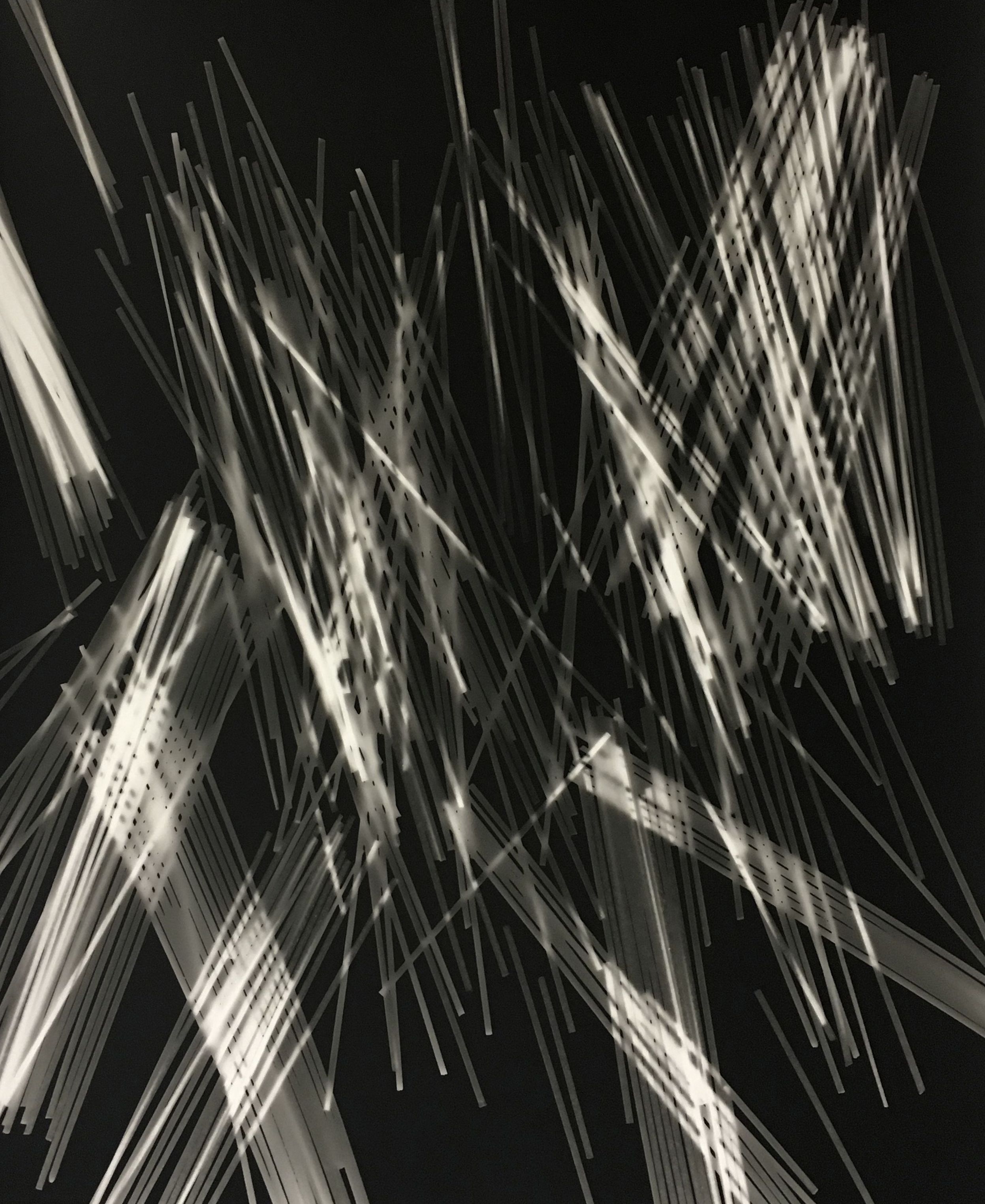 The food is used almost as an offering, as if in front of an altar, reshaped and manipulated to constitute sacred images that refer to light, abstract forms, and cosmic shapes. The intention was to be more of a suggestion than an evident index of the object, even though the method of analogue and camera-less photography used is based on the outline and shadow of the object itself.

The first time I exhibited the "Cesta Básica" series was in Berlin. I had a solo show at House of Egorn titled "Descent" where I was talking about the decline of my country by referring to the snake as a symbol. The fall from the celestial to the terrestrial as in Judeo-Christian culture, but also questioning the idea of the cycles, the ouroboros, the snake that bites its own tail.

I wanted to explore how we might break such cycles of violence, a reality not exclusive to Venezuela of course. One of the works in the show that accompanied the photograms was a video. This piece combined many historical and diverse references of the snake with the unrest in Venezuela. I used images of students protesting and been detained, government police and military attacks against the population, and paramilitary killings – mostly young protesters – with impunity. These events were from 2014 and I was there. The video was exhibited in January 2017 and a few days later protests started again. In April the situation had escalated, this time lasting 6 months and resulting in a total of 163 deaths.

Later that year, I was given the opportunity to show "Cesta Básica" in the UK at Photofusion, London.   I wanted to respond to the history of their space, which was founded by a documentary photographer collective. I decided to collaborate with a group of Venezuelan photojournalists. The "Cesta Básica" works were exhibited alongside crude images of repression, hunger and violence.  Titled “Broader Implications”, a phrase I took from a newspaper referencing the situation in Venezuela and the wider international consequences, the idea was to create a dialogue between different forms of photography. The tension amidst images that could be catalogued as ‘fine art’, and ‘documentary’ resulted in an interesting and more inclusive way to reach the viewers. For me it was essential to give a voice to the photographers still practising locally, under so much repression and adverse conditions. 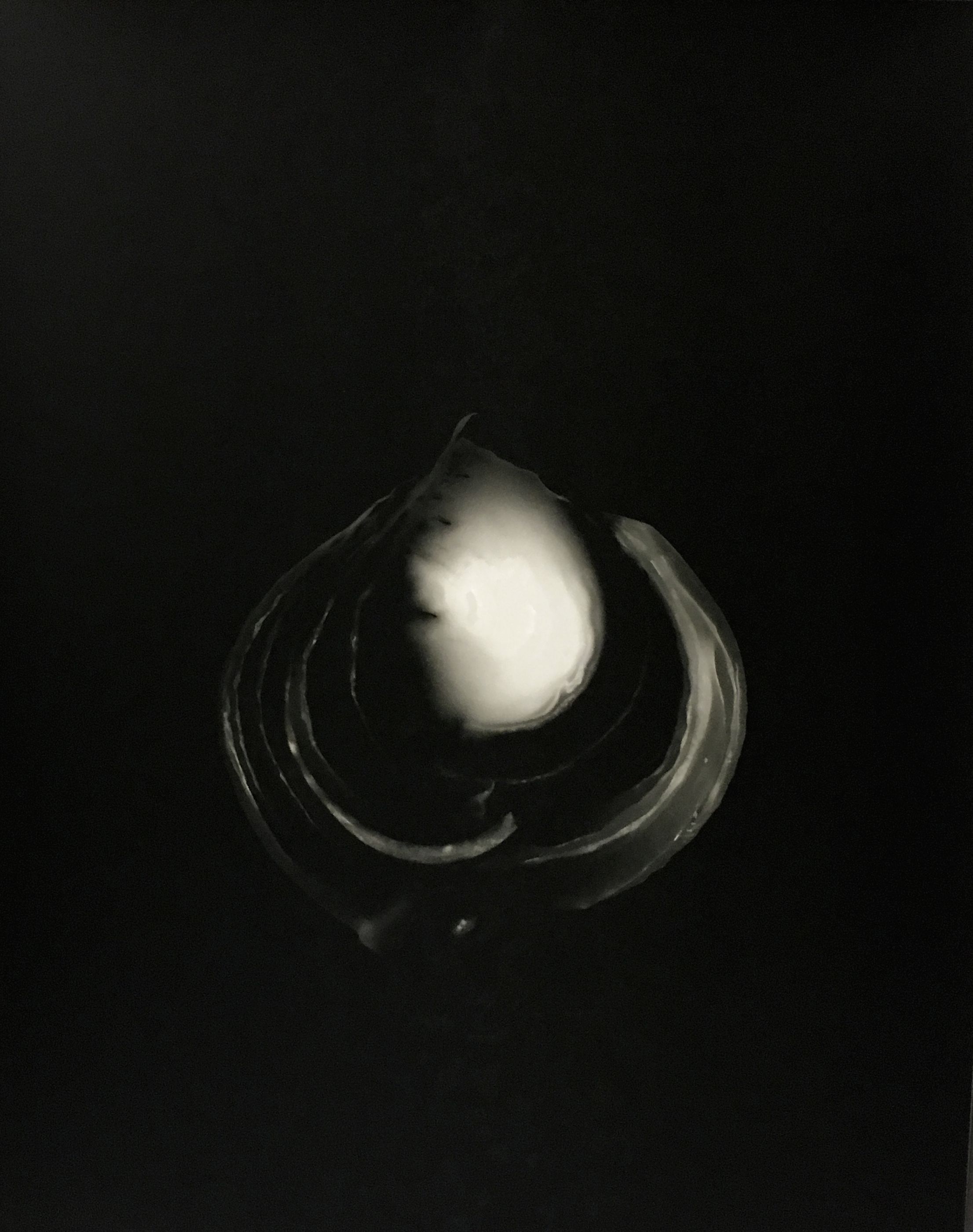 I invited Fabiola Ferrero, Ale Cegarra, Betty L. Zapata, Oscar B. Castillo and Gabriel Osorio to join the project, and Rodrigo Orrantia to write and collaborate as well. I organised workshops, talks, and bilingual guided tours with local Latin-American groups, such as IRMO (Indio American Refugee and Migrant Organization) and LAWA (Latin American Women's Aid). All this was supported by Arts Council England, Grants for the Arts.

The "Cesta Básica" series tries to convey a very personal story. It affects my everyday life even if I'm not in Caracas. Members of my family are still living there, and I hear their crazy tales on the phone, multiple assaults and kidnapping, no electricity for hours, no water for days.

Through this project and by writing this, I wanted to provide a step towards creating awareness and giving visibility to a strange, foreign situation that most of the time appears incomprehensible.