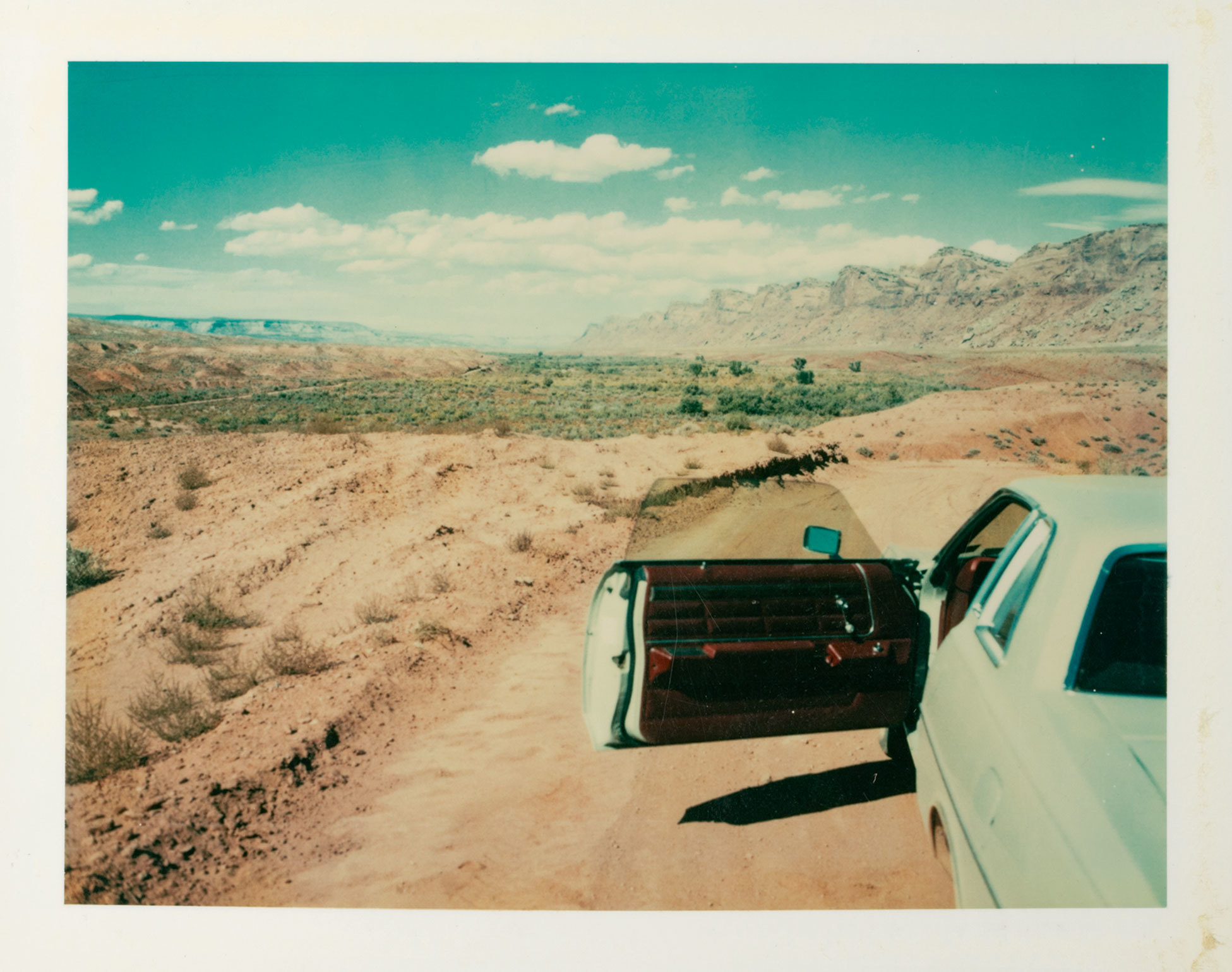 This exhibition offers a rare opportunity to see the personal and previously unseen Polaroid work of Oscar-nominated filmmaker, Wim Wenders (b.1945, Germany) and provides a singular insight into the artist’s thought processes, preoccupations and aesthetic inspirations.

Whilst his larger photographic works are well known, this is the first time he has shown a selection of the many thousands of Polaroid photographs taken, both on and off location, between the late 1960s and mid 80s.   Wenders’ fascination with the Polaroid form stems from his early adoption of the format while he was learning the craft of film-making.  Polaroids operated as a visual notebook, a way of testing out frames and ideas, but more than that they offered him a kind of liminal space between the subject and the photograph, the photographer and the act of taking a photo, the intention and the outcome.

“The entire Polaroid process (and procedure) has nothing to do with our contemporary experience, when we look at virtual and vanishing apparitions on a screen that we can delete or swipe to the next one. Then, you produced and owned ‘an original’! This was a true THING, a singular object of its own, not a copy, not a print, not multipliable, not repeatable. You couldn’t help feeling that you had stolen this image-object from the world. You had transferred a piece of the past into the present.”  - Wim Wenders, writing in his Artist’s book of the same title, Autumn 2017

Instant Stories, presents over 200 of Wenders’ Polaroids encompassing portraits of cast and crew, friends and family, behind-the scenes, still-lives, street-photography and landscapes.  Alongside diary-like impressions and homages to his artistic inspirations, including Fassbinder and Warhol, the small format images take us on a literal and metaphoric journey through Europe and the US.   From his first trip to New York, his fascination with American TV, views from rooftops (he’d never been so high up before), shop-fronts, roads, cars and many other visual recordings, Wenders’ Polaroids reflect a distinctive and lyrical vision -  at once both intimate and portentous.

The exhibition will also feature a selection of moving images from his films, reflecting moments in Wenders’ canon, where Polaroid cameras and still photographs form a vital part of the narrative, such as the photo-obsessed protagonist in ‘Alice in the Cities’ (1974).

Instant Stories: Wim Wenders’ Polaroids is a collaboration between The Photographers’ Gallery, C|O Berlin and the Wim Wenders Foundation.

Wim Wenders is represented as a Photographer by Blain|Southern.

This exhibition will be presented alongside 4 Saints in 3 Acts - A Snapshot of the American Avant-Garde, the first exhibition worldwide to focus on the photographic dimensions of this ground-breaking American modernist opera.  Featuring a libretto by Gertrude Stein and a score by Virgil Thomson and an all African-American cast, it premièred on Broadway in 1934.

The establishment of the Wim Wenders Foundation in Düsseldorf in 2012 was intended to create a legally binding framework to bring together the cinematic, photographic, artistic and literary lifetime work of Wim Wenders in his native country and to make it accessible worldwide to a general public permanently. The non-profit foundation model ensures that the whole body of work is now more independent and thus remains beyond the reach of any form of private self-interest. Any proceeds are used to finance the purpose of the foundation: The promotion of the arts and culture through distribution, restoration, preservation and research of Wenders work on the one hand and through the promotion of young talents in the area of innovative cinematic narration on the other hand.

The Photographers’ Gallery opened in 1971 in Great Newport Street, London, as the UK’s first independent gallery devoted to photography. It was the first public gallery in the UK to exhibit many key names in international photography, including Juergen Teller, Robert Capa, Sebastião Salgado and Andreas Gursky. The Gallery has also been instrumental in establishing contemporary British photographers, including Martin Parr and Corinne Day. In 2009, the Gallery moved to 16 – 18 Ramillies Street in Soho, the first stage in its plan to create a 21st century home for photography. Following an eighteen months long redevelopment project, the Gallery reopened to the public in 2012. The success of The Photographers’ Gallery over the past four decades has helped to establish photography as a recognised art form, introducing new audiences to photography and championing its place at the heart of visual culture.