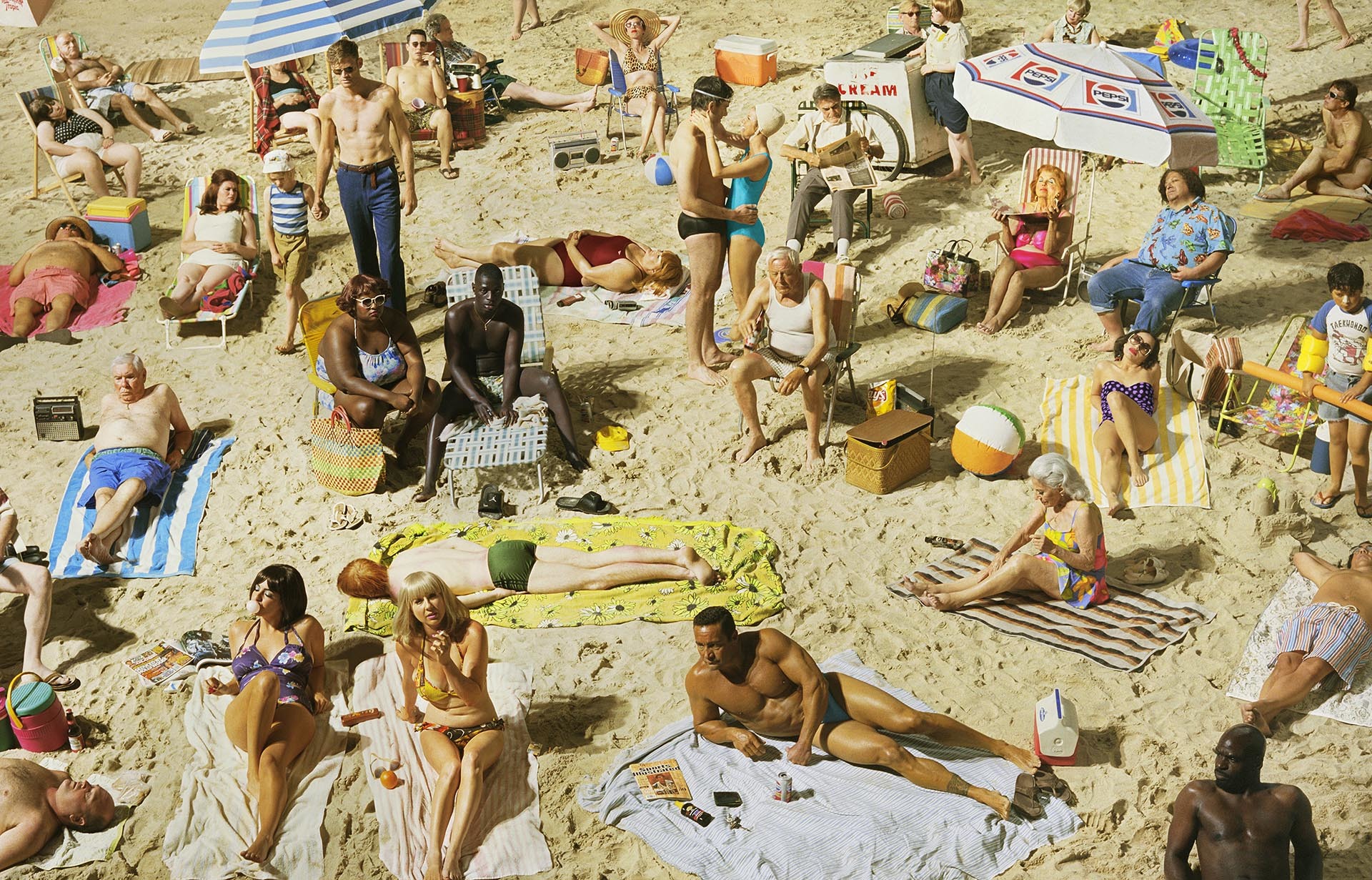 Silver Lake Drive is a major new exhibition at The Photographers’ Gallery, London, marking the first mid-career survey of American photographer and filmmaker, Alex Prager (b.1979).

Tracing Prager’s remarkably rich career over the last ten years and taking place over two gallery floors, the exhibition encompasses over 40 photographs including her trademark, large-scale Technicolor photographs alongside her complete film works.

Prager’s distinctive works crosses the worlds of art, fashion, photography and film, exposing the human melodrama and dark unsettling undercurrents that are threaded her subject matter. Referencing the aesthetic principals of mid twentieth century Hollywood cinema and fashion photography, as well as such photographers as William Eggleston, Diane Arbus and Cindy Sherman, each of her images are packed with a multitude of emotional layers and narrative possibilities.

Her early photographs were predominantly shot on sets in Los Angeles, with carefully staged scenes further heightened by hyper-styled costumes, makeup, lighting and use of a richly saturated colour palette, lending the images a particular dramatic intensity.

In her celebrated Crowd series, each figure is presented in sharp focus drawing attention to individual characters and stories and hinting at interior lives, separate from outward appearances. Prager often depicts spaces where people find themselves, sometimes unwillingly, in close proximity to others: streets, beaches, airport lounges, theatres. Favouring an aeriel perspective, she purposefully pushes the viewer into a position of surveillance, offering an optimal viewpoint to observe the characters in her frames. Occasionally, a single figure – usually a blond ingénue that seems lifted out of a Hitchcock film, or Douglas Sirk melodrama – looks directly up at the camera revealing the theatricality of the set-up.

The female figure functions as a central protagonist in Prager’s tableaux and is singled out for attention through composition, camera angle and costume. The women in her frames are often shot in extreme close-up to capture exaggerated emotion wear highly styled and codified clothes and sport elaborate, improbable hairstyles.

Similarly, in her films, (which draw upon Film Noir, as well as the work of Maya Deren and Alain Resnais), women take centre stage in open-ended narratives, portraying a range of sharply contrasting emotional states - often with the camera trained in extreme close-up on their faces.  Her first film, ‘Despair’ starred Bryce Dallas Howard, while her second short ‘La Petite Mort’ (2012) starred French actress Judith Godreche, with narration from Gary Oldman. Prager sees these immersive film installations as “full-sensory versions” of her photographs; an attempt “to show the before, now and after of one of [her] images.”

In her most recent project, she departs from her usual Los Angeles territory for a different type of stage and setting, choosing instead The Opera Bastille in Paris, where she captures the various stages of performance for a prima ballerina – a role performed by Emilie Cozette. The tension between the ballerina and the audience is traced throughout the film, from pre-performance nerves, preparation and ritual, audience anticipation, of excitement and anxiety of the performance right through to the final curtain.] The film also carries a beautifully arranged Stravinsky score by Radiohead producer Nigel Godrich.

This comprehensive exhibition presents over 40 photographs and her complete filmic oeuvre, all of which capture the banal and the fantastic, the everyday and the theatrical in Prager’s heightened reality.

Silver Lake Drive is curated by Nathalie Herschdorfer and is produced in collaboration with the Museum of Fine Arts Le Locle, Lehmann Maupin, New York and The Photographers’ Gallery

A fully illustrated catalogue will be published with Thames & Hudson in 2018 to accompany the show.

For General information and enquires about The Photographers’ Gallery, including their archive, Print Sales Gallery or Bookshop contact:

The Photographers’ Gallery opened in 1971 in Great Newport Street, London, as the UK’s first independent gallery devoted to photography. It was the first public gallery in the UK to exhibit many key names in international photography, including Juergen Teller, Robert Capa, Sebastiano Salgado and Andreas Gursky. The Gallery has also been instrumental in establishing contemporary British photographers, including Martin Parr and Corinne Day. In 2009, the Gallery moved to 16 – 18 Ramillies Street in Soho, the first stage in its plan to create a 21st century home for photography. Following an eighteen months long redevelopment project, the Gallery reopened to the public in 2012. The success of The Photographers’ Gallery over the past four decades has helped to establish photography as a recognised art form, introducing new audiences to photography and championing its place at the heart of visual culture. www.thephotographersgallery.org.uk

The Museum of Fine Arts in Le Locle, a UNESCO World Heritage Site, has been an institution for art lovers since the second part of 19th century. Ten to twelve temporary exhibitions a year broaden visitors’ perspective as MBAL juxtapose art projects by international and Swiss or by established and emerging artists. Photographs, prints, installations, the museum is open to all media and to prints and multiples in particular. Recent exhibitions included artists such as Georg Baselitz, Henri Cartier-Bresson, Sol LeWitt, Andy Warhol, not to mention Anni Albers, Claudia Comte, Jungjin Lee, Vik Muniz and Hiroshi Sugimoto. Le Locle is a Swiss town in the Jura mountains bordering the department of Doubs in France. www.mbal.ch