To Know the Beast Intimately

Before it is won through conquest, what “holds” the invader is what lies ahead.

— Edouard Glissant, The Poetics of Relation (1990)

Representation has historically played a crucial role in the way minorities have gained rights through visibility. As minoritarian artists and writers, how do we discuss the inherent shortcomings of representation-as-tactic, and resist the exceptionalist tendencies it inevitably gives rise to? Instead of demanding the basic rights (to life, mobility, welfare and justice) for all, it is often the “goodness” of the subjects that is used to argue against unjust and biased actions and discriminatory laws. Why should a deserving working engineer, college student, law-abiding citizen, father, mother, or any player of a recognisable and acceptable societal role (generally based on the Western heteropatriarchal understanding of humanity anyhow) be banned or discriminated against?

On the human-monster axis, legibility decreases as we slide from the human to the monster. The barbarian, the alien, the terrorist, the mysterious weirdo ought to evolve into (the late-capitalist version of) the human to become comprehensible: the one that consumes, whose attention span is shorter than a goldfish’s memory, who goes to sleep digesting data and wakes up looking at a screen. 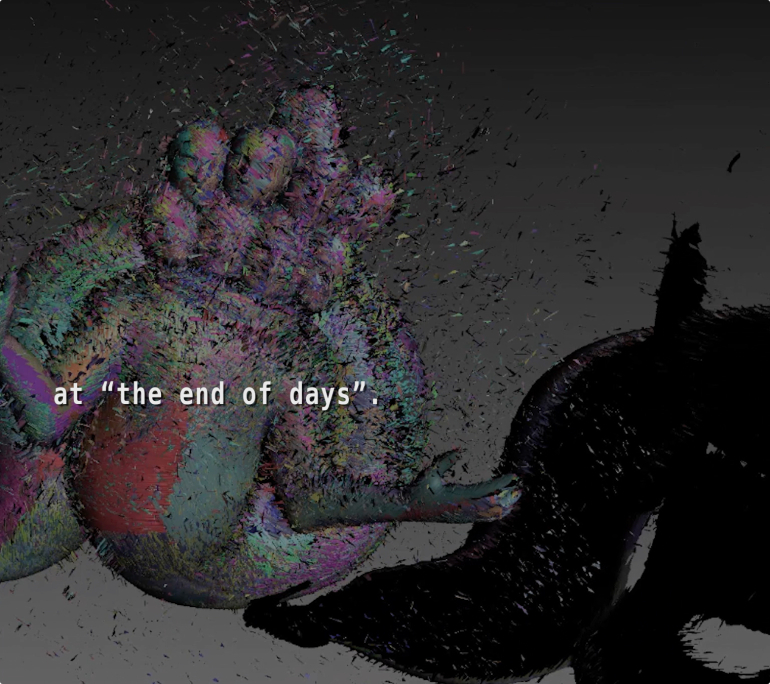 Legibility and visibility, although not mutually exclusive, are neither in direct causal relation to one another. More visibility does not necessarily render a subject more legible and vice versa. Empathy — any attempt toward peace that emphasises the “similarity” and “unity” of all humankind through representational means — operates on the basis of legibility.

If mainstreaming, as a mode of resistance, attempts, through art, popular culture and journalism to render a people “normal” and “peaceful”, Morehshin Allahyari’s Ya’jooj and Ma’jooj raises the question of how these notions of “normalcy” and “peace” are constructed. Instead of encountering a “good” or “authentic” representation of a people, in Ya’jooj and Ma’jooj we find ourselves leapfrogging from the human towards the monstrous: the jinn.

In western orientalist representations, jinns are often depicted as either powerful male slaves who can make three wishes come true (think Aladdin) or subservient yet problem-solving females; predecessors of sorts to Siri or Alexa (think I Dream of Jeannie). Like everything else, jinns are also reduced to more tangible creatures for the western orientalist imagination: male jinns are racialised servants with superhuman capabilities but limited agency; female jinns are desirably naughty yet docile. Their gender is binary and, like “us”, jinns have heteropatriarchal desires.

My upbringing was full of stories of Jinn-o-Pary (Jinns and Fairies).1 Because jinns were invisible, fluid creatures anything one might need to be alarmed about would involve a jinn’s interference. Devil, the infamous jinn, was the shape-shifter who could manipulate you by “getting under your cover” and entering your body. When getting close to danger — the edge of a cliff, a river or fire — it was Devil that would push you over, to fall, drow or burn. 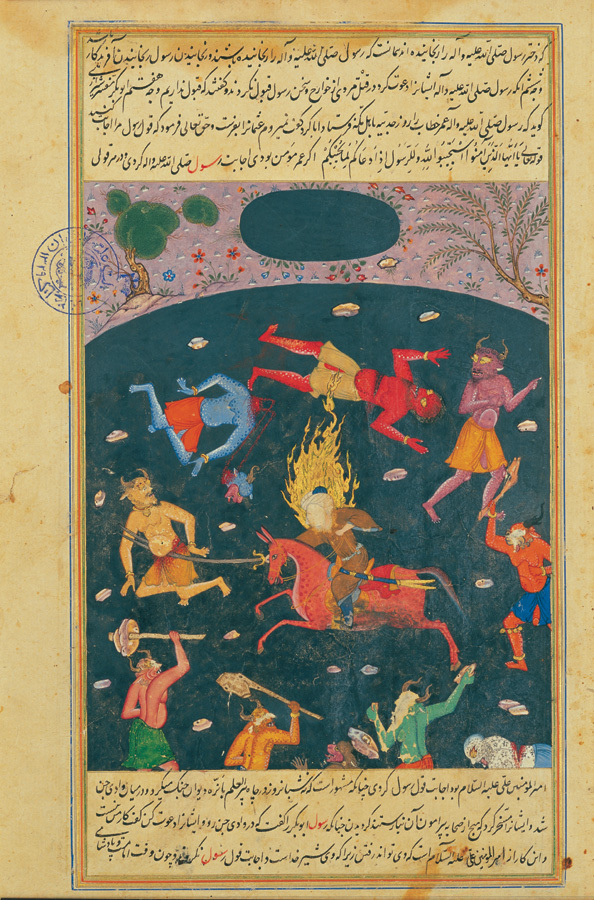 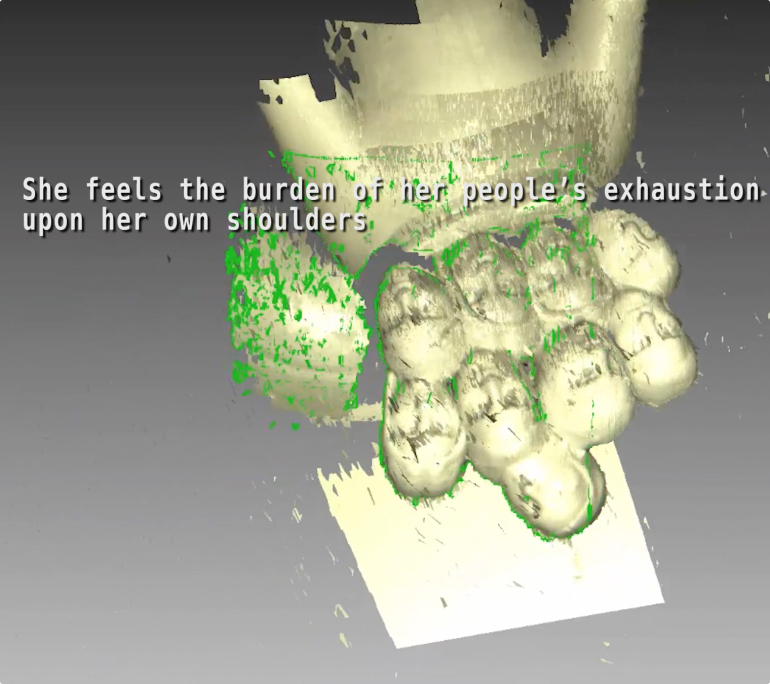 According to the Quran, angels are made of light, jinns of fire and humans of clay (soil and water). Like humans, jinns have agency, while angels are not capable of wrongdoing; they’re purely good. Devil falls because he refuses to bow down to Adam, God’s magnum opus of a life in creation. Devil’s refusal to bow down to Adam was his refusal to accept the human’s superiority. In the quranic version, although Devil originally disobeys God, he remains in competition with Man’s power and stature for the rest of his life, not God’s:

And [mention] when We said to the angels, “Prostrate to Adam,” and they prostrated, except for Iblees. He was of the jinn and departed from the command of his Lord. Then will you take him and his descendants as allies other than Me while they are enemies to you? Wretched it is for the wrongdoers as an exchange. 2

Jinns look like humans until they are discovered; their identities revealed by their feet — animal like and twisted backwards. These moments of recognition when the human could tell they were enamoured, seduced or deceived by something not human, such as a jinn, were the climax of many of my childhood stories. What did the protagonist do once they realised the community or the person they were interacting or living with (sometimes for years) was jinn, not human? Once the jinn’s feet were revealed, what remained there to be seen? Was this moment of revelation one of immediate transformation, where from then on the human saw nothing but jinn? This is where all the stories ended, but where an exploration of Morehshin Allahyari’s Ya’jooj and Ma’jooj might begin. 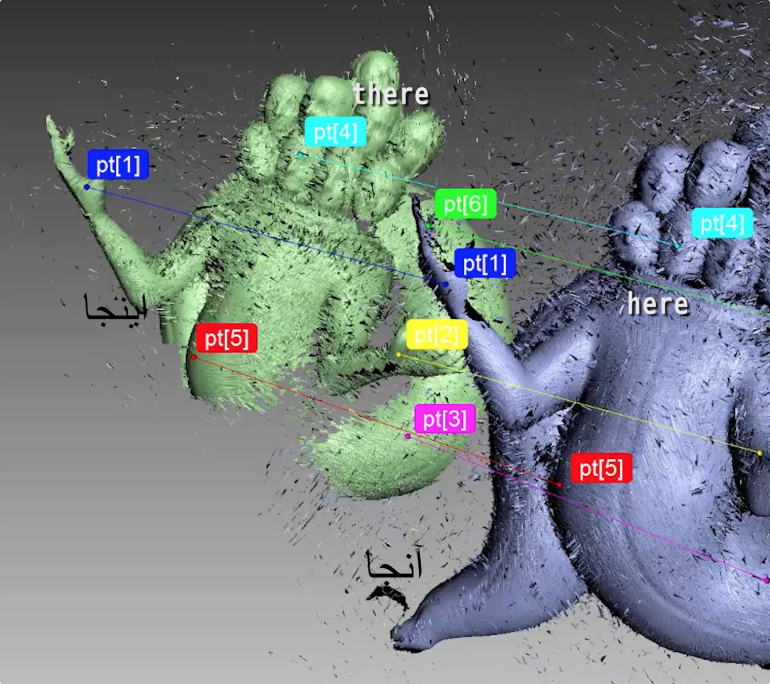 Dhul-Qarnayn, a good fella, was asked to defend the people against Ya’jooj and Ma’jooj (Gog & Magog), the mystical mass embodying corruption, perversity, debauchery and immorality. A monster depriving the people of peace, spreading pure chaos. According to the Quran, Dhul-Qarnayn built a wall out of pieces of iron, and welded them together with melted copper. Perfectly sealed, the wall was not to be penetrated or climbed by Ya’jooj and Ma’jooj, keeping them at bay as the people inside lived on happily ever after in isolated peace. In this tale, then, what Dhul-Qarnayn built was more than just a wall that he claimed he could destroy on God’s order; what he constructed was the idea of the wall as deterrent. The people from then on lived with the knowledge of a deterring technology called “wall”.

Morehshin Allahyari’s video, She Who Sees The Unknown: Ya’jooj and Ma’jooj shows the 3-D scanning of a Ya’jooj and Ma’jooj sculpture the artist previously made, intertwined with text she has written and collected from different sources. While there are numerous Quranic, as well as Biblical and Toratian allegorical and historical interpretations of Ya’jooj and Ma’jooj, Allahyari’s rendition is one that takes a curious look at the monster that was created. Allegorical figures, like jinns, are temporal embodiments of human desires and emotions. The beast comes into being to tell a story about good and evil: the people and their invader, the land and its defender. Once the story is told, what remains of the beast?

Allahyari’s Ya’jooj Ma’jooj departs from this tale of survivalism to look at life on the other side of the wall, where creation is a site of simultaneous decadence and becoming. Ya’jooj and Ma’jooj, the plural that is also singular, the unit that embodies multiplicity, is constantly “rendering,” yet never fully formed or legible. The ten-minute video is an extended gaze from when this encounter happened, when the people, Dhul-Qarnayn and Ya’jooj and Ma’jooj stared into each other’s eyes and began to see beyond the “defended,” the “invader” and the “deterrence technology” of the wall. The moment of recognition is that of infinite reflection where one finally sees themselves in the other, yet one will not see the reflection until one stops to see through: ‘she to whom the image clung like a mirror'.

Watch a video interview with artist Morehshin Allahyari in which she discusses Ya'jooj and Ma'jooj here.

Gelare Khoshgozaran گلاره خوشگذران is an interdisciplinary artist and writer working across the mediums of video, performance, installation and writing. Born and raised in Tehran and living in Los Angeles, she envisions the city as an imaginary space between asylum as “the protection granted by a nation to someone who has left their native country as a political refugee” and the more dated meaning of the word, “an institution offering shelter and support to people who are mentally ill.” Her work has been exhibited in solo and group exhibitions at the Queens Museum of Art, Museo Ex-Teresa Arte Actual, Malmö Konsthall, LACE, The LA Municipal Art Gallery, Southern Exposure, Human Resources, Interstate Projects and Thomas Erben Gallery, among others. Gelare was the recipient of the 2015 California Community Foundation Fellowship for Visual Artists, the 2015 Creative Capital Andy Warhol Foundation Arts Writers Grant, and the 2016 Rema Hort Mann Foundation Award for Emerging Artists. She is the co-founder and editor of contemptorary.org.