In the Bill Brandt Room

India has been interpreted for us over the years through Western eyes - from 19th century British colonial images to Cartier-Bresson's enduring photographs of the aftermath of Gandhi's assassination. An Economy of Signs gives us a different picture - a view from the interior.

The exhibition presents the work of eight young Indian photographers, of the generation born since Independence. Their work is evident of a new, independent and growing area of photographic activity which seeks to extend the restricted and conventional domain of advertising and editorial work for the media in the urban centres of Delhi and Bombay.

Each exhibitor has focused in depth on one aspect of contemporary India, looking beyond the facade at the immense diversity of its societies, its histories and cultures. The show's title, An Economy of Signs, is drawn from the author R.K. Narayan's tales of Malgudi, the mythical South indian town and a microcosm of Indian society: here the 'economy' is taken to be India, the 'signs' the photographic traces which portray, and aim towards a partial reading of, its complexities and contradictions.

Ram Rahman's documentation of Delhi is laden with clues as to the survival of the city's traditions and the struggle to govern the world's largest democracy.

Sheba Chhachhi's work stems from her involvement with the women's movement, and deals with representations of the lives of activist women.

Karan Kapoor has documented the dwindling Anglo-Indian society; a group of people of mixed race cauht in a time warp between the poles of a British and Indian heritage.

Asim Ghosh has been following 'Sadhus' (ascetics) for some time, isolating a tenacious example of an alternative lifestyle which survives in contemporary society.

Amita Prashar has worked with rural development issues, and presents a story of the survival of rural families in north-western India, and their adaptation of women's skills to the new economic reality.

Sanjeev Saith's work is a personal interpretation of lives in the remote Himalayas, an elemental existence under threat from contemporary development.

Ketaki Sheth's 'Bombay Portraits' reveal the drama in the ordinary lives of Bombay citizens, portrayed with the intimacy of an insider.

Sooni Taraporevala deals with the Parsis, an 'endangered species' whose unique way of life is being overwhelmed by the swelling city of Bombay. 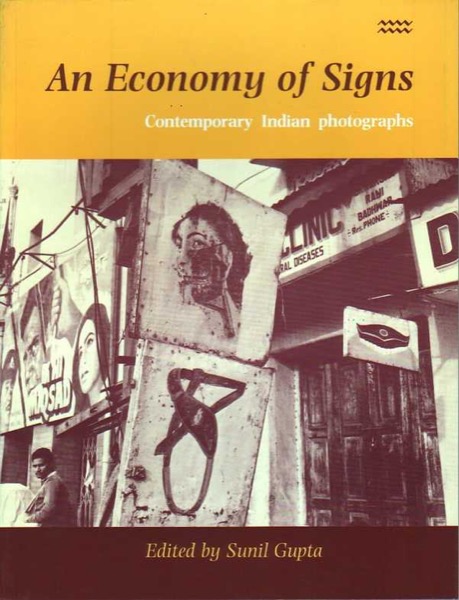 The work was specially commissioned for The Photographers' Gallery, and curated by Sunil Gupta; it toured for two years after its London showing.

A book of the same title was published by Rivers Oram Press, priced 9.95.

An Economy of Signs was sponsored by Kingfisher Strong Lager Beer and CMC Limited, and presented with the assistance of Visiting Arts.

From Here to Eternity: Sunil Gupta. A Retrospective