Hashem El Madani (born 1928, Lebanon) is a studio photographer who, for the last 50 years, has been working in Saida, Lebanon. Madani's portraits of individuals and groups were commissioned by the sitters, who sometimes would request additional refining through retouching or hand-colouring. He set up his first studio in his parents' living room in 1948, and as his business grew he opened a modern space on the first floor of the prestigious Chehrazade building in Saida in 1953, which he still uses today. As well as operating from his own studio, Madani set up a mobile studio wherever clients could be found, for example in schools, at election posts where photographic identity cards were required, and in people's homes.

Madani's studio created a site where individuals could act out identities using the conventions of portrait photography, with the poses inspired by the desires of the sitters, ranging from Vogue models to kung fu moves, Hollywood romances to pamphlets distributed by Kodak and Agfa. Often people came to the studio wearing their most elegant clothes and accessories to be photographed with. As Madani realised that people used these props to create identities for themselves he began collecting objects and outfits for his clients to experiment with, developing the idea of a studio as a space for play . These items included a radio, a wedding dress, a child's doll, fashionable sunglasses, Bedouin dress, plastic flowers, guns, cowboy hats, and even a bicycle - all of which reoccur in the photographs as individuals play out their ideal selves in front of the camera.

Motivated to expand his business, Madani set out to collect the portraits of all of Saida's families; he claims that he has photographed about 90% of the city's population. Today he is able to identify the families and individuals who came to his studio to be photographed, often recalling their poses and always remembering those who did not return to pick up their portraits. In creating such an extensive record of the townspeople in this multi-confessional Mediterranean location, Madani's archive of over 500,000 images subtly alludes to the changing political climate through his subjects' behaviour.

The studio photographer faces constant shifts in their profession, as clients' tastes will inevitably be altered by subtle changes in society and fashion. This exhibition reflects on the practice of studio photography, considering it as both descriptive and inscriptive of social identities. It both reflects how people look, but also how they desire to be seen. The success of Madani's business can be attributed to the fact that he created a representation of his clients that they wanted. Madani would 'fix' the cross-eyed, reduce a double chin, add accessories or hand-tint the pictures. Madani responded to the desires of his sitters and gave those he portrayed the freedom to act out idealized versions of their identities and to have these communicated in their portraits. 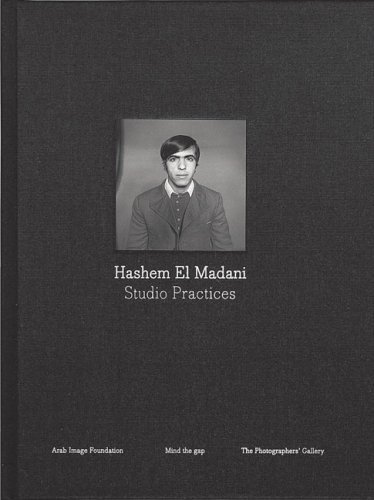 Images from Hashem El Madani's archive are being collated by the Arab Image Foundation, a non-profit making organisation based in Beirut actively engaged in excavating and creating a history of photography in the Arab world.

The exhibition is accompanied by a publication with over 80 images, an essay by Stephen Wright and an interview between Akram Zaatari and Hashem El Madani. ISBN: 9953003238

Presented in association with Visiting Arts. Visiting Arts works to support the presentation and exhibition in the UK of high quality contemporary arts from around the world.

Information for this exhibition is currently incomplete or yet to be catalogued.

We’re working to document our past programme using material in our Archive, and so information on this exhibition may become available in the future.

Can you help us? If you visited or were involved with this exhibition and have information you can share with us, we’d love to hear from you.  You can get in touch using the details below.   Likewise if you spot anything incorrect, have any further information that would improve this listing, or want to share a memory of TPG please contact us at tpg.archive@tpg.org.uk

For further details on our past programme,  visit our Archive and Study Room.

Mediterranean: Between Reality and Utopia