Notes on Laura Letinsky and Lightness

In an image from the series Fall, a crumpled plastic cup lists towards the edge of a table. In the throes of being propelled along the surface, contorted, and with its back arched – as if about to lurch further forward – the cup, inanimate but on the tip of being called into action, will trip over its inert objecthood and cast off dramatically over the precipice of the table and onto the floor.  It would make a lively smash on a stony surface, if only it wasn’t plastic; if only it were actually tumbling; if only it were even going to fall. Having paused, our eye catches a glimpse of the floor: like the table, it tilts, leans and produces an animation that we sense and may want to initially believe, but which we know to be the product of the camera’s sloping angle of view.  In our encounter with Laura Letinsky’s still life images, so much of our reading appears as a projection: nothing is certain, our reading speculative, anticipatory.  In Fall, we are cast into a reading of what is to be – a looking to the future that photography calls upon, yet rarely delivers.  The objects in Fall, referencing Giorgio Morandi’s still life paintings, with their weight hone in on the edge of the table – threatening, promising, to fall off – if only the camera were there to catch it. Their presence on the precipice is a source of a continual and quiet drama. 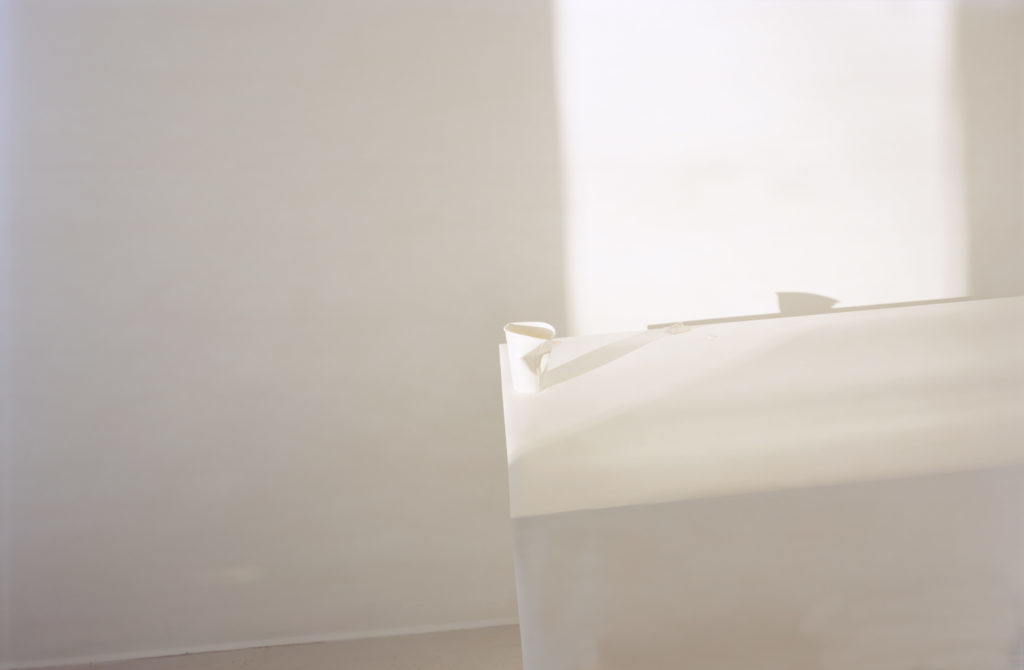 Many of the works from Fall describe weight and gravity, yet they depict a virtual, potential weight and a gravity that is for the moment at least, outside of our visual perception. These forces are anticipated, expectant. The plastic cup, which we know to be light enough to be swept away in a breeze, feels uneasily solid when isolated, seen only with its shadow (which here, as in the language of the advertising photograph, describes presence). The shadow catches the lip between table and wall: the seeming weight of the cup making all the stronger the sense of a fall that is about to occur. We imagine gravity taking hold.

As viewers, our interpretations of images are usually narrative, our readings causal – a list produces a tilt, produces a fall. Letinsky is intensely aware of how the viewer perceives and reads the image.  And because weight constructs a narrative and sets in motion a series of forces, she can also remove this weight; removing narrative at a stroke. Anticipating and short-circuiting the projection of our viewing, in Ill Form and Void Full Letinsky attempts a kind of weightlessness, one that is the production of a suspended looking.  In Untitled Number 3 (2011), a peach occupies the centre of the frame. It is muted but defined, resonant of painting, but protruding outwards, its roundness overt, its objecthood strident and insistent. A rind curls nearby. Adjacent is the flesh of a melon, cleanly sliced, yet cut off a little too abruptly at its base. Objects, including a bowl beneath it can be recognised, but they appear distorted, almost anamorphic. As our eyes scan the surface of the image, flatness is rendered increasingly uncanny, magical perhaps. Italo Calvino in his writing proposed a similar quality for literature, remarking “whenever humanity seems condemned to heaviness, I think I should fly like Perseus into a difference space. I don’t mean escaping into dreams or into the irrational. I mean that I have to change my approach, look at the world from a different perspective, with a different logic and within fresh methods of cognition and verification. The images of lightness that I seek should not fade away like dreams dissolved by the realities of present and future.” As we cannot fully reconstruct the spaces from which these images are drawn, we are placed in a state of suspension, a pictorial space outside of regular temporality: a lightness that is akin to flight, that is awash with different perceptions. 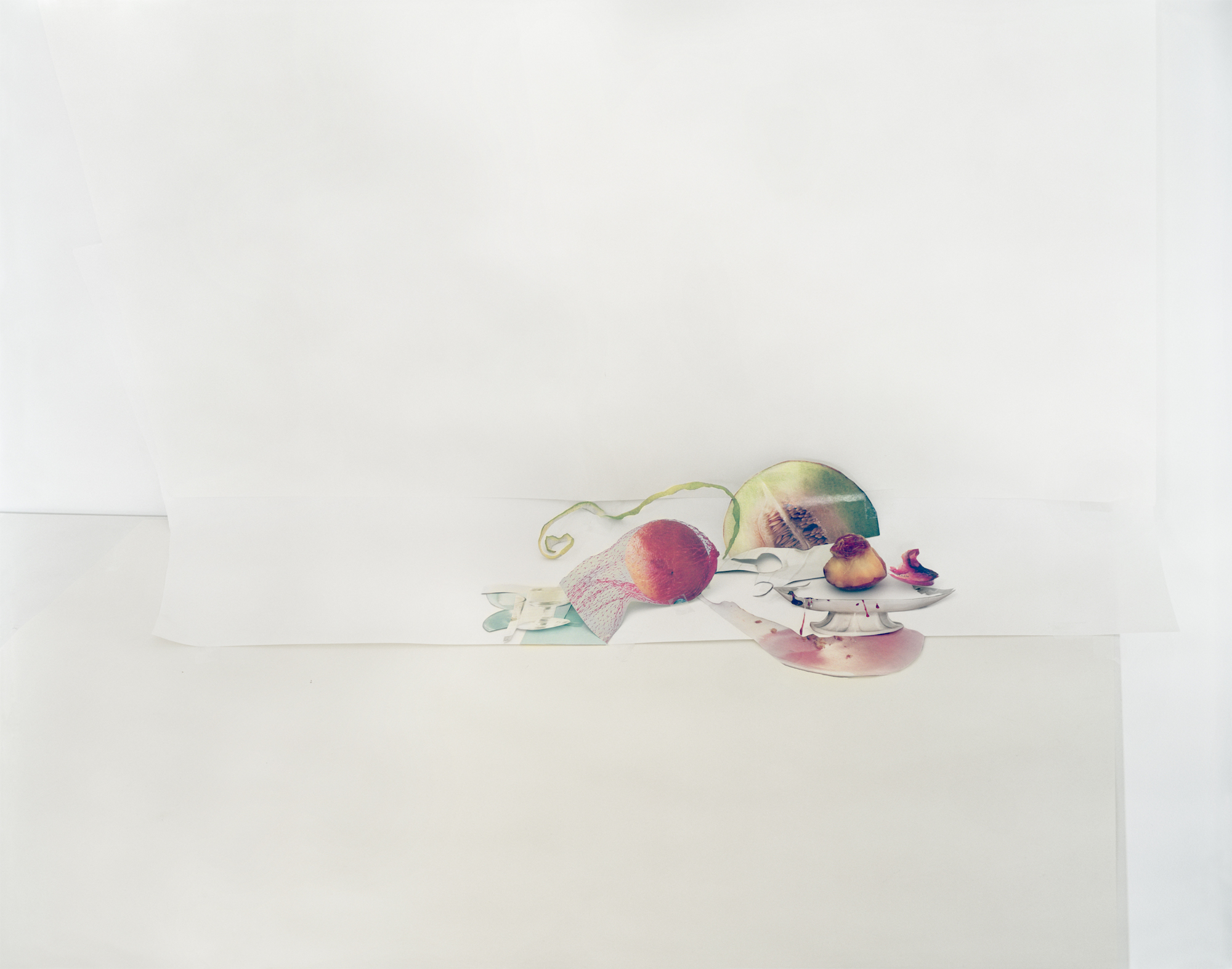 Formed of slivers of paper, many of the works in Ill Form and Void Full depict not objects but images: they construct spaces, and do so through an exploration of illusion, image upon image.  Drawn from magazine pages – what could be the large print runs of lifestyle magazines and Sunday supplements – the clean and all too fresh depictions of food, cut out by hand, become objects arranged in a new still life.  Laid out for us in the spare white of the studio, these constellations of images are flattened and reconstructed spatially, their narratives trapped, their presence emphasised.  Letinsky has stated that she is concerned with depicting “what the camera shows” – the product is a deeply visual and yet theoretical image, an image of photography.  The photographic apparatus, so often associated with transparency, becomes a subject, though it is not one that turns back upon itself directly.  With a sleight of hand, we see the camera’s products, not the device itself. That which is in front of us in Ill Form and Void Full are photographs, the product of the act of photography played out fully to the sphere of its dissemination.  It is out in the world, acting, being used, often entirely overlooked.

Vilem Flusser, in his Towards a Philosophy of Photography (1983), makes the proposition that the photograph is a ‘theoretical image’. Flusser begins by stating that we can easily understand the black and white image as theoretical: black and white events do not take place in the world.  Black and white are concepts, and the black and white image can so too be perceived by the viewer to be a theoretical image of the object photographed (see Ed Ruscha’s photographs of washing powder boxes, Spam tins, or car polish). A photograph is not the thing itself.  Yet as he astutely states, we are frequently caught out by the colour picture which, in a program of continual photographic development, shifts ever closer to resembling the thing it depicts, constructing a proliferation of ever more images. Flusser is strident in arguing that the colour photograph remains a theoretical image too (it merely contains additional theories of colour), and here, in Ill Form and Void Full, this becomes apparent. Letinsky’s photographs contain theories of space, of representation, the properties of the printed image and of the colour palette of painting. They approach the question of photography in part by showing us how photographs operate, and how they exist in the world (especially in the studio).

In the image of the image, all is paper. Letinsky allows us to see the thin materiality of the photographic object when her images capture the slight curves and shapes that paper adopts.

The layering of images within another image, this mise-en-abyme, leads us through layers of pictorial depth, in the process drawing our attention to illusion.  Yet whilst Letinsky’s recent still lifes construct the technical abyss of the infinite image, they go far beyond it as crowd-pleasing optical effect.  In Untitled Number 12 (2011), two Sharon Fruit rest on a surface. Restated in a reflection, their presence is asserted, reassured. Again a surface is tilting, but on this occasion a number of objects, including two spoons, will float and not fall. One recedes into the distance, another is cut off, its sense of presence abruptly truncated.  All are composed of paper, cut-out photographs.

Where the standard mise-en-abyme clearly demarcates the edge of its illusion, here the division is particularly thin. Cut to their edges, the Sharon Fruit, centre stage, appear substantively real.  Their colours are saturated, and the lighting consistent: we can only begin to sense their actual spatiality as objects in another space. We can recognise their flatness (as pictures), but only by understanding that they also construct an additional dimension (as photographs) within the image. There are three spaces in all: the space of the image, the pictures within, and thirdly, the image before which we stand. We are compulsively drawn through layers of the image only to be brought back to its surface.  That space which we occupy bodily, standing or sitting in front of the representation, comes into view as stems and fruit, drooping over the side of the table, appearing to reside not within the image but upon its surface.  A number of Letinsky’s images contain comparable marks, often as stains or smears.  They conflate the layers of the image to draw attention to their presence (a reference to collage and the re-photographed montage emerges).  However quick the illusion oscillates, we are struck by how the photographed object and the photographed photograph are difficult to distinguish.  How can we see the photograph, when it insists on attempting to disappear?  After all, the reproduction image, the re-photographed photograph, is the zero-degree of photography, an image made not to be seen. Ill Form and Void Full is awash with reproductions: we cannot wholly depend upon our eyes to see them, they ask us to provide different modes of looking, new means of verification. 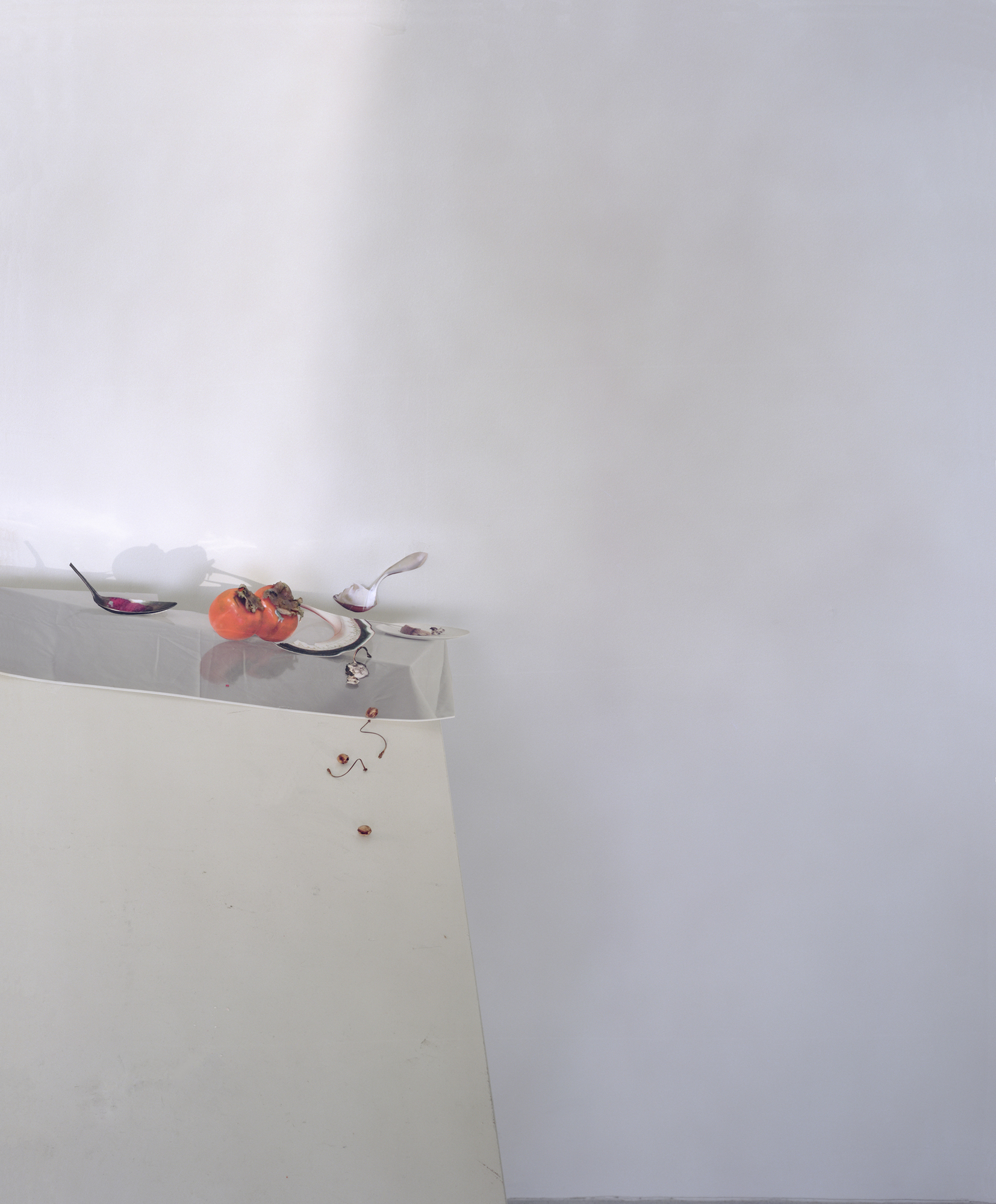 In the image of the image, all is paper. Letinsky allows us to see the thin materiality of the photographic object when her images capture the slight curves and shapes that paper adopts.  The unglazed surfaces of her prints promise to attract dust and markings. Atmospherically sensitive and likely to waver from the rigid geometries of its production, paper curves and folds, responsive to a shift in climate.  Its angularity belies an acute sensitivity.  Paper, too, is a theoretical surface, a receiving support for both image and text. Might we not think of Letinsky’s images as functioning in this state of virtuality, a work ‘on paper’? They occupy a provisional condition, a space of gesture.  This of course returns us to writing, to the difficulty of writing about a photograph, but also the challenge, that we can only consider discursively, of a photography that attempts to show itself. In Ill Form and Void Full Letinsky balances space and removes time to do just that. She creates moments of suspension that are real and yet ethereal, which float and yet are grounded.

Duncan Wooldridge is an artist, writer and Course Director of BA Photography, Camberwell College of Arts, University of the Arts London.

This essay was commissioned and published during the exhibition Laura Letinsky: Ill Form and Void Full, held at The Photographers' Gallery between 18 Jan – 17 April 2013.