An extraordinarily versatile and innovative photographer, Vishniac is best known for having created one of the most widely recognised and reproduced photographic records of Jewish life in Eastern Europe between the two World Wars. Featuring many of his most iconic works, this comprehensive exhibition further introduces recently discovered and lesser-known chapters of his photographic career from the early 1920s to the late 1970s. The cross-venue exhibition presents radically diverse bodies of work and positions Vishniac as one of the most important social documentary photographers of the 20th century whose work also sits within a broader tradition of 1930s modernist photography.

Born in Pavlovsk, Russia in 1897 to a Jewish family Roman Vishniac was raised in Moscow. On his seventh birthday, he was given a camera and a microscope which began a lifelong fascination with photography and science. He began to conduct early scientific experiments attaching the camera to the microscope and as a teenager became an avid amateur photographer and student of biology, chemistry and zoology. In 1920, following the Bolshevik Revolution, he immigrated to Berlin where he joined some of the city’s many flourishing camera clubs. Inspired by the cosmopolitanism and rich cultural experimentation in Berlin at this time, Vishniac used his camera to document his surroundings. This early body of work reflects the influence of European modernism with his framing and compositions favouring sharp angles and dramatic use of light and shade to inform his subject matter.

Vishniac’s development as a photographer coincided with the enormous political changes occurring in Germany, which he steadfastly captured in his images. They represent an unsettling visual foreboding of the growing signs of oppression, the loss of rights for Jews, the rise of Nazism in Germany, the insidious propaganda swastika flags and military parades, which were taking over both the streets and daily life.

German Jews routinely had their businesses boycotted, were banned from many public places and expelled from Aryanised schools. They were also prevented from pursuing professions in law, medicine, teaching, and photography, among many other indignities and curtailments of civil liberties. Vishniac recorded this painful new reality through uncompromising images showing Jewish soup kitchens, schools and hospitals, immigration offices and Zionist agrarian training camps, his photos tracking the speed with which the city changed from an open, intellectual society to one where militarism and fascism were closing in.

Social and political documentation quickly became a focal point of his work and drew the attention of organisations wanting to raise awareness and gain support for the Jewish population. In 1935, Vishniac was commissioned by the world’s largest Jewish relief organisation, the American Jewish Joint Distribution Committee (JDC), to photograph impoverished Jewish communities in Eastern Europe. These images were intended to support relief efforts and were used in fundraising campaigns for an American donor audience. When the war broke out only a few years later, his photos served increasingly urgent refugee efforts, before finally, at the end of the war and the genocide enacted by Nazi Germany, Vishniac’s images became the most comprehensive photographic record by a single photographer of a vanished world.

Vishniac left Europe in 1940 and arrived in New York with his family on New Year’s Day, 1941. He continued to record the impact of World War II throughout the 1940s and 50s in particular focusing on the arrival of Jewish refugees and Holocaust survivors in the US, but also looking at other immigrant communities including Chinese Americans. In 1947, he returned to Europe to document refugees and relief efforts in Jewish Displaced Persons camps and also to witness the ruins of his former hometown, Berlin. He also continued his biological studies and supplemented his income by teaching and writing.

In New York, Vishniac established himself as a freelance photographer and built a successful portrait studio on Manhattan’s Upper West Side. At the same time he dedicated himself to scientific research, resuming his interest in Photomicroscopy. This particular application of photography became the primary focus of his work during the last 45 years of his life. By the mid-1950s, he was regarded as a pioneer in the field, developing increasingly sophisticated techniques for photographing and filming microscopic life forms. Vishniac was appointed Professor of Biology and Art at several universities and his groundbreaking images and scientific research were published in hundreds of magazines and books.

Although he was mainly embedded in the scientific community, Vishniac was a keen observer and scholar of art, culture, and history and would have been aware of developments in photography going on around him and the work of his contemporaries. In 1955, famed photographer and museum curator Edward Steichen featured several of Vishniac’s photographs in the influential book and travelling exhibition The Family of Man shown at the Museum of Modern Art. Steichen later describes the importance of Vishniac’s work. ''[He]…gives a last- minute look at the human beings he photographed just before the fury of Nazi brutality exterminated them. The resulting photographs are among photography's finest documents of a time and place.”

Drawn from the Roman Vishniac Archive at the International Center of Photography, New York and curated by Maya Benton in collaboration with The Photographers’ Gallery curator, Anna Dannemann and Jewish Museum London curator, Morgan Wadsworth-Boyle, each venue will provide additional contextual material to illuminate the works on display and bring the artist, his works and significance to the attention of UK audiences.

Roman Vishniac Rediscovered is organised by the International Center of Photography. It is made possible with support from Mara Vishniac Kohn, whose generosity founded the Roman Vishniac Archive at ICP, and from the Andrew and Marina Lewin Family Foundation, Estanne and Martin Fawer, The David Berg Foundation, Righteous Persons Foundation, National Endowment for the Arts, Olitsky Family Foundation, the ICP Exhibitions Committee. James and Merryl Tisch, Koret Foundation, and additional anonymous donors.

Generously supported by the Blavatnik Family Foundation, The Sigrid Rausing Trust, Cockayne Grants for the Arts and The London Community Foundation.

With additional support from The Death Penalty Project, Simons Muirhead & Burton and the Exhibition Supporters Circle.

This exhibition is dedicated to Mara Vishniac who died on 17 December 2018. 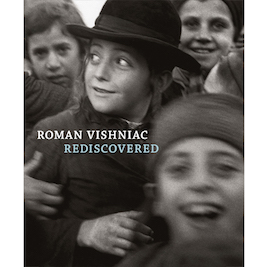 Emphasizing Roman Vishniac’s prodigious talents as one of the great documentary photographers of the 20th century, this volume presents the full range of his artistic genius.