For over 40 years, from the 1950s until the late 1990s, Harry Jacobs worked as a commercial photographer from his studio on Landor Road, Stockwell, London SW9. In this time he took an estimated 60,000 photographs. Jacob's compelling archive captures generations of individuals and families, their hopes and achievements.

Brixton and its surrounding areas, such as Stockwell and Clapham, was the arrival point for many of the new immigrants, from those of the 1948 Windrush era onwards. With its cheap housing, employment 'opportunities' and market packed with familiar fruits, vegetables, meats and branded products, Brixton gradually developed into a home-from-home. The reality, however, was often different and many of Jacobs' subjects rapidly became disillusioned with a place that was in stark contrast to their dreams. Overt racism showed itself everywhere as they tried to find accommodation, meaningful employment and acceptance into British society.

Jacobs' jovial and charming character ensured his studio became the social hub of the area. Initially West Indian, then latterly, African communities met, gossiped and reminisced amongst the hundreds of portraits that Harry had pasted to his walls and in his shop window. Jacobs was one of the few affordable portrait photographers around and his images are a cultural 'snapshot' of the community, including many other groups like the Asian, Irish and Portugese who also live in the area.

His photographs also record changes in street fashion - from the traditional pork pie hats of the 1950s and the Shaft-style cool of the 1970s with its Afro hairstyles, bell-bottomed trousers, plaid jackets and tanktops, to the power-dressing of the 1980s. His pictures record everyday urban life quirkily rendered both in his studio and in people's homes - the trophies gained for sporting prowess; the taking up of a new hobby, karate or playing the guitar; and special occasions such as birthdays, communions, weddings, funerals and even the purchase of a first television set.

Jacob’s pictures show first jobs, birthdays, anniversaries, christenings, weddings, family portraits, sporting poses, even the purchase of a TV set — through the changing fashions of the last fifty years. His studio pictures always had the same distinctive, tropical backdrop, with added props supplied by Harry or his subjects. His images are a powerful yet intimate, testament to the growth of the Black community in South London and a fascinating and revealing visual history of Black migration to Britain. 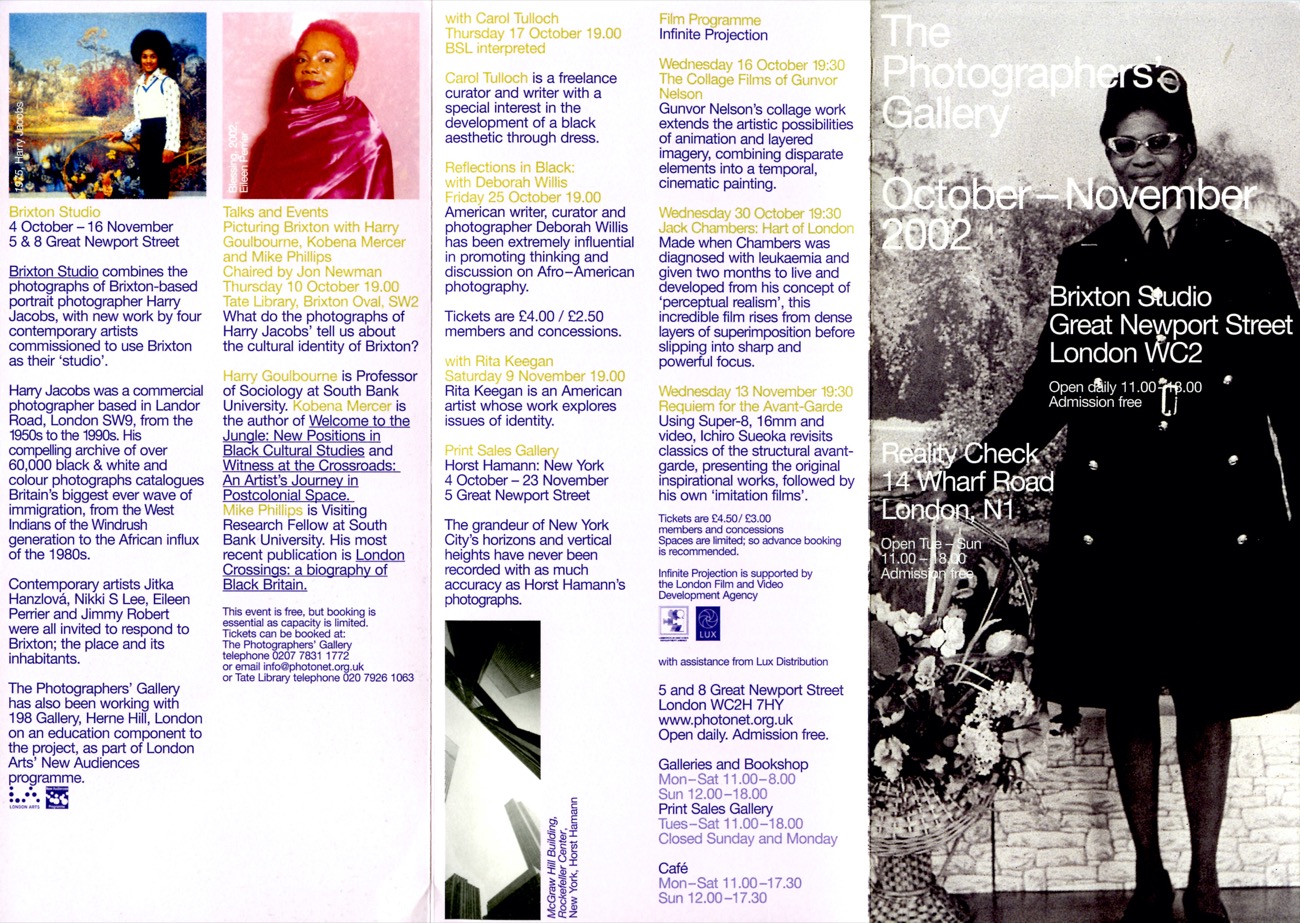 Towards Landor Road, Muslims from the local mosque congregate on streets amongst the new white middle-class who have bought up property in the area. Past the skateboard park, Little Portugal springs up with its bodegas and coffee shops; the churches, empty now, will on Sunday be filled with lively and mainly black congregations.

The Photographers' Gallery has commissioned four artists to develop their own responses to contemporary Brixton, using its streets and buildings as their temporary studio. Each has been selected for their own distinctive styles of portraiture and their understanding of the relationship between people and place. In contrast to Harry Jacobs' formal, composed portraiture taken inside the studio, these artists have gone into the community of Brixton to engage on a more personal and spontaneous level with their subjects.

Eileen Perrier takes portraits of groups of people linked by a common thread, to which she often has a personal connection. Her previous series, Grace (2000), was a series of portraits of people who, like Perrier herself, have gaps between their front teeth. Her work for Brixton Studio, Blessing, (2002), is a series of people who visit her hairdresser's home-based salon in Brixton. The hairdresser is known locally as 'Pinkie' because she loves pink, her hair is dyed pink and the interior of her home is pink. Eileen has photographed a number of Pinkie's clients with a variety of hairstyles, all of whom have the same pink satin shawl wrapped around them. Blessing continues a profession to which many Afro-Caribbean women were drawn, reflected in Jacobs' portraits of women who had recently graduated from hairdressing school.

Czech-born Jitka Hanzlová focuses on the relationship between people and their relationship to place. Central to her work is an intense connection to her subjects, however temporary that relationship may be. Visiting Brixton over a number of months, Hanzlová became familiar with life on its streets, learning more through conversations with local people. Her street portraits for this commission are spontaneously taken, their subjects directly and frankly gazing into her camera. A previous work, Female, (1997-2000) featured portraits of women aged eight to eighty whom Hanzlová met in Europe and America. This followed Rokytník (1990-1994), a series of portraits made in the Bohemian village that had been her home before her exile to Germany.

Jimmy Robert's work deals with notions of displacement through film, performance and photography. His films, edited at home, are deliberately nostalgic, using a Super 8 camera and both colour and black and white film to convey an almost retro look. Chartham Court, (2002) is Robert's commission for Brixton Studio, and the name of the tower block in central Brixton where he lives. The film oscillates between scenes of the residents in the block and the local landscape beyond it.

The work of Korean-born, New York-based artist, Nikki S Lee is a hybrid of photography and performance. In her previous work, The Projects, (1997-2000) she is seen as part of a socially defined group appearing as punk, yuppie, tourist or skateboarder. For each project, Lee identified a particular group and over a period of time altered her appearance and adopts subtle mannerisms and gestures in order to blend in. After entering her new guise Lee will then ask a friend to take a snapshot of her. For Brixton Studio, in her series Part, (2002) Lee plays a character who appears to be living in Brixton, and is seen in bars, on the street, in the local swimming pool and other locations around the area, each time with a slightly different look and with new friends. The final photograph is cut in half so that only Lee herself remains in the image, and all that can be seen of her companions are the slightest clues to their identity, part of a hand or head. 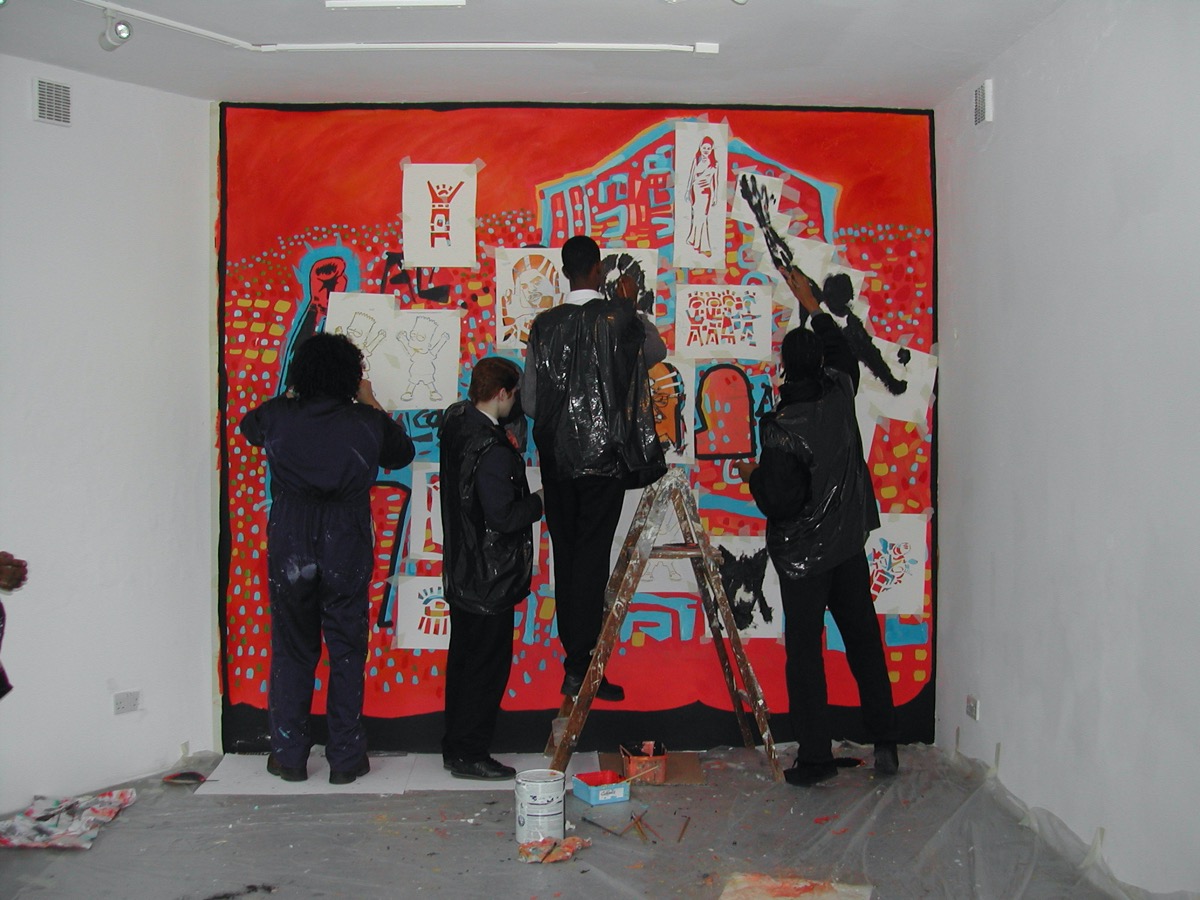 The Gallery would like to thank Nikon and Epson for providing the Gallery with their printer and scanner products for archiving Harry Jacobs' photographs, and Canon and Tapestry.MM for their assistance with the printing for the exhibition.

The artists' commissions and Brixton Studio exhibition have been supported, in part, by the New Audiences programme.