Although the area of Soho is relatively small (one square mile) and bordered by some of London’s richest and most commercialised streets, it has remained a complex place of unorthodoxy, diversity, tolerance and defiance.

Shot in Soho is an original exhibition celebrating Soho’s diverse culture, community and history of creative innovation as well as highlighting its position as a site of resistance.

Through a range of photographs, ephemera and varied presentations, the project reflects the breadth of life in a part of the capital that has always courted controversy and celebrated difference. It comes at a time when the area is facing radical transition and transformation with the imminent completion of Cross Rail (a major transport hub being built on Soho’s borders) set to make a landmark impact on the area.

This is a rare opportunity to see outstanding images from renowned photographers including William Klein, Anders Petersen, Corinne Day, alongside other photographers whose work in Soho is lesser known such as Kelvin Brodie, Clancy Gebler Davies and John Goldblatt. The show also includes a new commission by Daragh Soden.

The exhibition draws on the history, the myths and the characters of this hotbed of unpredictability, disobedience, eccentricity and tightly-knit communities.

Part movie-set, part crime scene, part unfolding spectacle, Soho in recent decades has been the centre of the music, fashion, design, film and the sex industry – a place of unresolved riddles, a place of shadows and also somewhere to call home for incoming French, Italian, Maltese, Chinese, Hungarian, Jewish and Bengali communities – perhaps here is the prototype for multicultural open London.

Aston­ishingly Soho has remained a village at heart – maybe due in part to the way it was purposefully hidden from view behind Nash’s sweeping Regent Street crescent – there tucked away and locked within a tight street grid that has remained unchanged for centuries.

In many ways Soho has remained London’s rebellious teenager. It has been a place where anything goes and as creative as it has been sleazy.

The exhibition is curated by Julian Rodriguez, Head of the Department of Film & Photography, Kingston School of Art, Kingston University and Karen McQuaid, Senior Curator, The Photographers’ Gallery.

"A movingly melancholic show that shuns the obvious" — The Guardian ★★★★☆

Available from the Bookshop 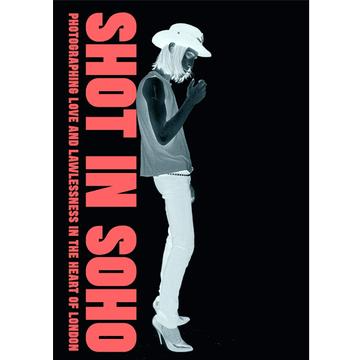 This book, which accompanies the exhibition Shot In Soho captures Soho as a refuge for marginalized, pioneering, and unconventional people.

In Conversation with... Anders Petersen

With thanks to Majid Boustany, Founder of the Francis Bacon MB Art Foundation and the Embassy of Sweden